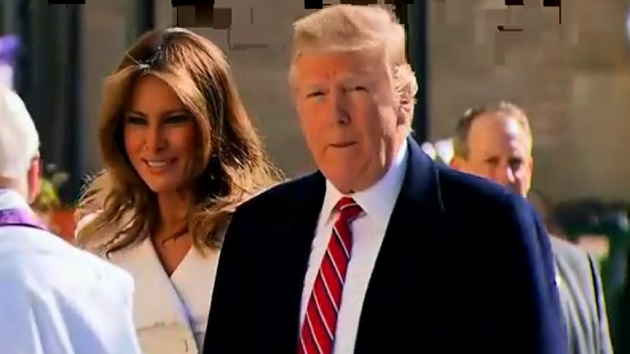 (WASHINGTON) — President Donald Trump told ABC News Chief Anchor George Stephanopoulos that he did not fire special counsel Robert Mueller because “that didn’t work out too well” for former President Richard Nixon. “I wasn’t gonna fire [Mueller],” Trump said in an exclusive interview with ABC News. “You know why? Because I watched Richard Nixon go around firing everybody, and that didn’t work out too well.”In what became known as the Saturday Night Massacre in October 1973, Nixon ordered his attorney general to fire Archibald Cox, the special prosecutor investigating the Watergate scandal. Rather than carry out that order, his attorney general and deputy attorney general resigned. Nixon then appointed an acting attorney general, and he fired Cox. Nixon, facing an impeachment inquiry, ultimately became the only U.S. president to resign.Trump also told Stephanopoulos that, in his opinion, Article II of the U.S. Constitution, which establishes the executive branch and outlines the powers of the presidency, gave him the authority to fire the special counsel.”Look, Article II. I would be allowed to fire Robert Mueller,” Trump said in a portion of the interview that aired on ABC’s “This Week” Sunday. “He wasn’t fired. Okay? Number one, very importantly. But more importantly, Article II allows me to do whatever I want. Article II would have allowed me to fire him.”The president’s claim that he never tried to fire the special counsel is contradicted by the Mueller report, which outlines multiple instances reported by former White House Counsel Don McGahn when Trump instructed McGahn to have the acting attorney general, Rod Rosenstein, dismiss Mueller.”I was never going to fire Mueller. I never suggested firing Mueller,” Trump told Stephanopoulos, adding that “it doesn’t matter” what McGahn said under oath.In the interview, Trump asserted that “a lot of great lawyers” agree with his interpretation of Article II that it affords the president sweeping powers. But the president hedged when asked whether a president can ever obstruct justice.”So your position is that you can hire or fire anybody, stop or start?” Stephanopoulos asked.”That is the position of a lot of great lawyers,” Trump said. “That’s the position of some of the most talented lawyers. And you have to have a position like that because you’re the president. But without even bringing up Article II, which absolutely gives you every right.””So a president can’t obstruct justice?” Stephanopoulos asked.”A president can run the country. And that’s what happened, George. I run the country, and I run it well,” he responded.”When the president does it, it’s not illegal?” Stephanopoulos pressed.”I’m just saying a president under Article II — it’s very strong. Read it,” Trump said.The special counsel offered a different interpretation of Article II in his report, which states that “under applicable Supreme Court precedent, the Constitution does not categorically and permanently immunize a President for obstructing justice through the use of his Article II powers.”The report goes on to say that under the United States’ system of checks and balances, “Congress may apply the obstruction laws to the President’s corrupt exercise of the powers of office.”Mueller’s nearly two-year investigation into Russian interference in the 2016 presidential election did not reach a conclusion on whether the president obstructed justice. However, the report, which runs more than 400 pages, outlined 11 episodes of possible obstruction, including the aforementioned attempts to remove the special counsel.Mueller said he did not reach a conclusion about whether the president obstructed justice because charging the president with a crime was “not an option we could consider” due to a Justice Department opinion that a sitting president cannot be indicted.Trump Tower MoscowStephanopoulos also asked Trump about his plans to build a Trump Tower in Moscow that continued into the 2016 presidential campaign.”I didn’t even do a deal in Moscow,” Trump said.”You were pursuing it,” Stephanopoulos followed up.”Excuse me. Pursuing, what does pursuing mean?” Trump said. “Do you know that I don’t even think they had a site? I don’t even think they knew who was gonna do the deal. It was a concept of a deal, more of a concept than anything else. It was a concept of a deal someplace in Russia, probably in Moscow, and I was looking at places all over the world.”According to the Mueller report, the Trump Organization “explored” a Moscow real estate project that would have included commercial, hotel and residential properties.”Between 2013 and June 2016, several employees of the Trump Organization, including then-president of the organization Donald J. Trump, pursued a Moscow deal with several Russian counterparties,” the report says.It goes on to say that Michael Cohen, Trump’s former personal attorney, “spearheaded” the efforts and reported updates to the Trump Organization, including directly to then-candidate Trump. Cohen also told lawmakers in closed and open sessions that he kept two of the president’s adult children, Donald Trump Jr. and Ivanka Trump, briefed about the Moscow project.When pressed on whether voters had a right to know that his company was engaged in business dealings with Russia during the campaign, the president insisted to Stephanopoulos that there was nothing nefarious about the project and he “wouldn’t mind” if information about those dealings was made public.”I wouldn’t mind telling ’em,” he said. “There’s nothing wrong with it — I don’t consider that pursuing a deal when you don’t even have a site.”Trump has previously denied that he has any business ties to Russia, even tweeting shortly before his inauguration, “I HAVE NOTHING TO DO WITH RUSSIA — NO DEALS, NO LOANS, NO NOTHING!”