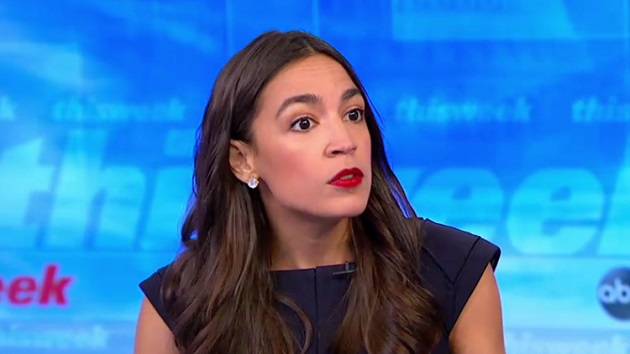 (WASHINGTON) — Freshman Congresswoman Alexandria Ocasio-Cortez said Sunday that with every passing day “the pressure to impeach (President Donald Trump) grows.” She added that Democrats need to start an impeachment inquiry “to look at what’s going on” and that the move should not be driven by polling or politics.”Every day that passes, the pressure to impeach grows, and I think that it’s justifiable,” she said in an exclusive interview on “This Week” with ABC News Chief White House Correspondent Jonathan Karl. “I think that with the president now saying that he is willing to break the law to win reelection, that — that goes — that transcends partisanship. It transcends party lines, and this is now about the rule of law in the United States of America.”Ocasio-Cortez said she thinks “there is a growing sentiment, even among” Democratic members in swing districts that an impeachment inquiry should be launched.”Ten counts of obstruction of justice, four with rock solid evidence. We have violations of the emoluments clause. We need to at least open an inquiry so that we can look at what is going on, and that is what opening an impeachment inquiry means,” she said. “Holding this president (to) account is holding all of government to account.”Earlier this week, in an exclusive ABC News interview, Trump told ABC News Chief Anchor George Stephanopoulos that if a foreign country called him saying it had information on an opponent, he said it wouldn’t be “an interference” and that he thinks he would “want to hear it.””If I thought there was something wrong, I’d go maybe to the FBI. If I thought there was something wrong,” he said. “But when somebody comes up with oppo research, right, that they come up with oppo research. ‘Oh, let’s call the FBI.’ The FBI doesn’t have enough agents to take care of it, but you go and talk honestly to congressmen, they all do it. They always have. And that’s the way it is. It’s called oppo research.”After Trump’s comments, House Speaker Nancy Pelosi said again that not one act or statement by the president would move her closer to supporting impeachment.”What we want to do is have a methodical approach to the path that we are on, and this will be included in that, but not any one issue is going to trigger, ‘Oh, now we’ll go do [impeachment].’ Because it’s about investigating, it’s about litigating, it’s about getting the truth to hold everyone accountable and no one is above the law,” Pelosi, D-Calif., told reporters in news conference on Thursday.Ocasio-Cortez stunned the political establishment when she unseated the longtime representative for New York’s 14th District, Rep. Joe Crowley, in the Democratic primary nearly a year ago and has since become one of the most known figures of the progressive wing of the Democratic party, describing herself as a Democratic socialist, a label also embraced by 2020 presidential candidate Sen. Bernie Sanders, I-Vt.Karl asked Ocasio-Cortez how Pelosi’s resistance to impeach is going over with progressives.”I think (the frustration is) quite real. I believe that there is a very real animus and desire to make sure that we are — that — that we are holding this president to account,” she said. “Holding this president (to) account is holding all of government to account.”Karl noted that two thirds of the Senate, which has 53 Republicans, 45 Democrats and two Independents who caucus with the Democrats, would have to vote in favor of impeachment for Trump to be removed from office, and Ocasio-Cortez agreed that a vote was unlikely.”Don’t you risk handing him a political victory here?” Karl pressed.Ocasio-Cortez said that Congress has to do its job. “If we’re talking about what’s going to be a victory for Trump and what’s not going to be a victory for Trump then we are politicizing and we are tainting this process, which, again, should be removed from politics.””I think for us, what we need to really realize is, are we doing our job as a member of the House?” she added. “And the Senate has their entire responsibility. … But I think we need to be concerned with our job in the House.”She said on “This Week” that she doesn’t “see the relevancy in calling for prosecution after he leaves office,” as Sen. Kamala Harris said she would pursue if she were elected president in 2020.”We have the ability … to actually kind of play out our responsibilities now. We have power now,” she said. “And to bump it to when we don’t have power, I don’t think makes a whole lot of sense.”