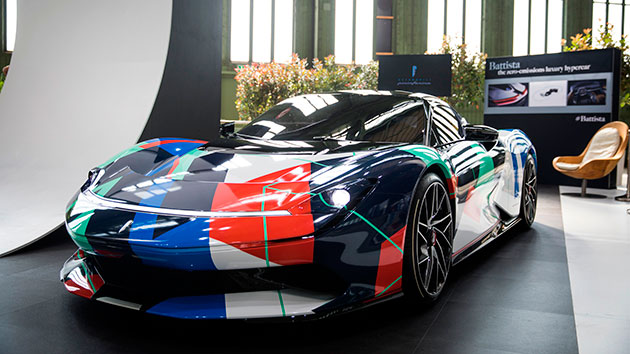 (NEW YORK) — When Indian auto and tractor maker Mahindra & Mahindra launched Automobili Pininifarina in April 2018, executives were charged with developing a line of extreme performance cars that would establish the nascent carmaker as the world’s newest, sustainable luxury brand.A year later, the marque’s first vehicle — the $2.2 million all-electric Battista GT hypercar — is already on track to shatter industry records before production begins in late 2020.”The instructions were clear,” Luca Borgogno, design director of Automobili Pininfarina, told ABC News. “The car needed to be a jump into the future without losing the values of every Pininfarina design — a mixture of innovation, purity, sensual lines and clarity of execution.”Borgogno and a small team worked for nearly two years on the car’s seductive design.”It’s beautiful, pure, rare,” he said. “I cannot count how many sketches were done for the Battista, but I can guarantee that when we found the right one, it was clear to everyone that this is what the car would look like.”Automobili Pininfarina may be the latest entrant in the rarefied supercar realm, but the name Pininfarina is legendary in the automotive world. Started in May 1930 by Battista “Pinin” Farina in Turin, Italy, the company built and designed special car bodies for individual clients, which included Ferrari, Fiat, Maserati, Alfa Romeo, Lancia, BMW and Cadillac. Some of the most sought-after cars — Ferrari Enzo, 1967 Ferrari 275 GTB4, Ferrari FF, 1947 Cisitalia 202 Gran Sport and Alfa Romeo Spider 1600 — have Pininfarina DNA in their metal bodies.The Battista is no exception. When it debuted at the Geneva Motor Show in March, auto enthusiasts immediately drew comparisons with Ferrari.”It’s tough to have a really original design,” Karl Brauer, executive publisher of Kelly Blue Book and AutoTrader, told ABC News. For blistering fast mid-engine supercars, “the wind dictates the design … and you get a lot of the same shapes,” he said.But that’s where the similarities ended. The Battista’s 120 kilowatt-hour battery pack delivers 1900 horsepower — that’s 475 HP per electric motor (one at each wheel). It sprints from zero to 62 mph in under 2 seconds. 280 miles on a single charge. Top speed is at least 217 mph, according to executives. It’s reportedly faster than any current Formula 1 race car. Production of the hand-made Battista will be limited to only 150 units.”This is further proof that there is insatiable hunger and demand for limited, high-production vehicles,” Brauer said.The company turned to Croatian EV maker Rimac for the battery technology and drivetrain.”The most important thing for us was to try to maintain, as much as possible, the proportions of a real hypercar, even if the mechanical layout with batteries and motors is very different from an [internal-combustion engine] car,” Borgogno said. “The great thing about electric cars is that, in general, there is less need of cooling and this gave us a chance to design a car without big openings and relate it as much as possible to the purity of the design.”Now company executives have a new challenge to conquer: finding buyers. Of the 150 units that will be produced, 50 are allocated for North America, 50 will go to Asia and the Middle East and the remaining 50 are slated for Europe.Dan Connell, Automobili Pininfarina’s chief brand officer, has been traveling the globe since March, meeting with prospective buyers who can afford the seven-figure hypercar.”We are pleased with how things are going so far,” he told ABC News. “We are helping people understand the business and share with them our design credentials.”Battista is just the beginning. Connell said Automobili Pininfarina will launch five to six additional luxury electric cars in the near future, though at lower price points.”We believe in our pure electric philosophy,” he said. “[Electric cars] have proven to be successful. … Look at the Tesla Model 3. We want to be ahead of the curve.”The next generation of auto enthusiasts will only grow up with electric cars, according to Angus Mackenzie, international bureau chief of Motor Trend.“Electrification of the automobile is inevitable,” he told ABC News. “The fastest performance cars are hybrids of some sort: the McLaren P1, Porsche 918, Ferrari Le Ferrari. Electric cars offer a lot of torque at low speeds — you accelerate faster.”Even though he was “super impressed” with the Battista in March, Mackenzie pointed out that name recognition alone won’t be enough to sell every model.”There will be early adopters who buy the car right away,” he said. “But right now it’s all on paper. The company has to prove itself. If the cars live up to the performance, word will spread.”He continued, “The key is to keep it exclusive. Customers are paying for exclusivity.”Brauer said he’s not surprised Automobili Pininfarina executives are still on a road show to drum up sales.”They really have to seek these customers out,” he noted. “Even before production begins, they’ll know if they can sell them.”MacKenzie said the massive accumulation of wealth in Asia and the Middle East has led to an influx of “ultra, ultra-expensive cars.””$2 million to $3 million sounds like a lot for a car, but not when someone is earning a million-dollar salary,” MacKenzie said. “There is a market, surprisingly, for vehicles in this range.”Even though the Battista may be one of the fastest — if not the fastest — cars on the market today, it won’t be a regular sight on the streets. Like many ultra-rare cars, the Battista will be ensconced in wealthy owners’ personal collections.”Maybe one or two of these cars will be driven,” Brauer said. “You won’t see it in the wild. It’s an ‘inside baseball’ vehicle.”Copyright © 2019, ABC Radio. All rights reserved.