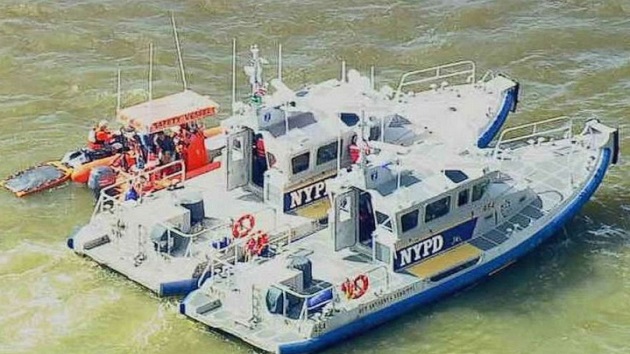 (NEW YORK) — A 67-year-old apparently drowned in the Hudson River during a distance-swimming competition on Friday afternoon, according to authorities.The man, whose name has not been released, was competing in the 8 Bridges Hudson River Swim when he disappeared during the second-to-last stage of the event. The entire competition covers 120 miles over seven days from the Rip Van Winkle Bridge, in upstate New York, to the Verrazzano Narrows Bridge, between Staten Island and Brooklyn.The stage Friday was to take swimmers from the Tappan Zee Bridge, renamed the Gov. Mario Cuomo Bridge, in Tarrytown, New York, to the George Washington Bridge in the Bronx, according to New York Open Water, which organized the competition. The stage was 15.7 miles long.The swimmer disappeared in the vicinity of the George Washington Bridge, according to the U.S. Coast Guard.After spending several hours searching for the lost competitor, the Coast Guard said it was transitioning to a “recovery” effort.”On behalf of New York Open Water, it is with great sadness that we report the loss of a swimmer today on Stage 6 of the 8 Bridges Open Water Swim,” the organizers said in a statement. “Our thoughts are first and foremost with the swimmer’s family and in respect for their privacy, we are declining to name the swimmer at this time.”The seventh and final day of the event, to be held Saturday, was canceled.A safety supervisor was monitoring the swimmers at the time of his disappearance, organizers said.”We can confirm that all swimmer safety protocols were in place and that the NYPD was escorting the field,” organizers said. “We will continue to work closely with the authorities and will provide updates as they become available.”The man’s body had not been recovered as of early Saturday.