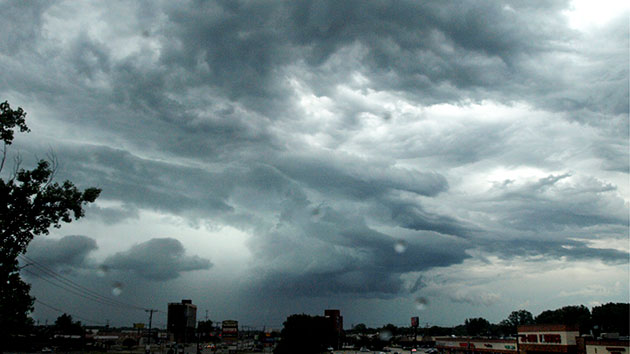 (COLUMBUS, Ohio) — The Father’s Day weekend will be a wet one for a large portion of the eastern half of the country.The radar on Saturday morning shows a couple areas of storms from the Plains through the Midwest and into parts of the interior Northeast. Storms are occasionally turning severe in parts of Kansas and northern Oklahoma, where wind gusts over 60 mph, along with some hail, will remain.The storms are primarily being driven by disturbances slowly moving northeast across the central U.S. this weekend. The first round of severe weather Saturday mainly exists across parts of the Midwest from Kansas to Indiana.Then, later in the day, as another disturbance forms in the southern High Plains, more storms will form across the Texas and Oklahoma Panhandle, as well as extreme southern Kansas. In all cases, the main threat for severe weather will include damaging winds and large hail. Brief tornadoes are possible across parts of the Midwest, but remain fairly unlikely.Storms developing across the interior Northeast are unlikely to be severe, but some of the storms could produce an occasional strong wind gust.On Sunday, the severe threat will slide into parts of central Oklahoma and northern Texas, including Oklahoma City and Texas (Wichita Falls and Abilene). Once again, the main threat will be damaging winds and large hail. Brief tornadoes are possible, but remain fairly unlikely.The disturbances that are forming in this region of the country are due to cooler and drier Canadian air clashing with the warmer Gulf moisture in the central and eastern U.S. Stubborn high pressure is steering these storms from Texas to Maine through the next several days.Unfortunately, this weather pattern will result in rounds of storms across the Plains and Midwest. Due to the slow-moving nature of the pattern for a few days, there is increasing potential for flash flooding. The first area of concern will be along Interstate 40 from Missouri to Pennsylvania, including areas like Indianapolis and Columbus, Ohio. Locally, over 4 inches of rain are possible through the weekend.Then, rounds of storms will move across parts of the southern U.S., including areas of Oklahoma, Texas and Arkansas, beginning on Sunday and lasting into part of next week.Parts of the South, especially Oklahoma and Arkansas, have had a very challenging spring so far. Little Rock, Arkansas, for example, has received 11.42 inches more rain than average so far in 2019. Tulsa, Oklahoma, also has received over 11 inches of rain more than average. Many waterways in parts of this region have just receded from the flood stage due to the very wet spring in the last week.Given that, the ground remains quite saturated and with more copious amounts of rain headed for the area, flooding looks to remain a concern for the region.Copyright © 2019, ABC Radio. All rights reserved.