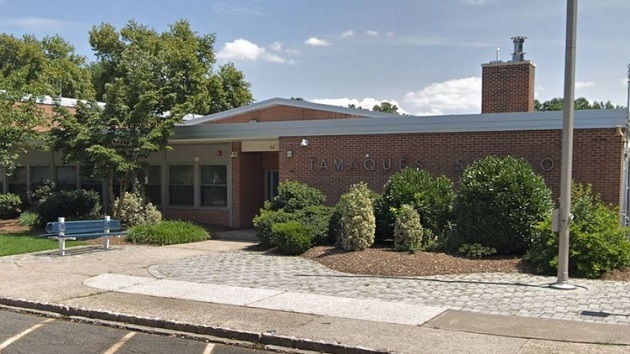 (WESTFIELD, N.J.) — A New Jersey elementary school went into lockdown on Thursday afternoon after a man with a loaded handgun and dozens of rounds of ammunition was found in the school parking lot.Police responded to the Tamaques Elementary School in Westfield, New Jersey, after receiving a call from the Delaware State Police saying that Thomas J. Wilkie was on his way to the school, according to a statement from the Westfield Police Department.When police arrived, they found Wilkie in an SUV with a .45-caliber handgun that was loaded with hollow-point bullets, according to a statement from the Union County Prosecutor’s Office.Wilkie also had two additional loaded clips with him and 130 rounds of ammunition in the trunk of the vehicle.The 46-year-old from Bear, Delaware, was immediately taken into police custody while the building remained in lockdown, according to the Westfield Police Department.Classes at the elementary school were done for the day when the incident took place, but after-school activities were in session.The lockdown was lifted after a security sweep of the building and perimeter, police said.Wilkie is charged with second-degree unlawful possession of a weapon, fourth-degree possession of hollow-point bullets and fourth-degree trespassing on school grounds, according to the statement from the Union County Prosecutor’s Office.Wilkie’s father told NJ.com his son had traveled to the school because of an issue with a girlfriend, or ex-girlfriend, who worked there. He also said Thomas’ brother had reported him to Delaware State Police.If convicted, he could face five to 10 years in prison for unlawful possession of a weapon.His next court appearance is scheduled for June 19. Copyright © 2019, ABC Radio. All rights reserved.