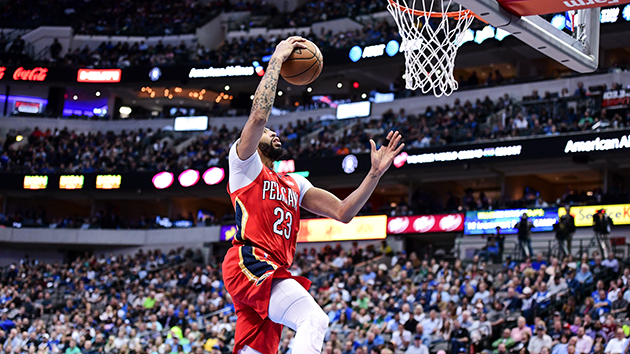 (LOS ANGELES) — After months of waiting, the Los Angeles Lakers have acquired superstar Anthony Davis from the New Orleans Pelicans, ESPN reports.Davis, a six-time All-Star, requested a trade in January. He has just one season left on his contract, but he has privately indicated that he would sign a long-term extension in Los Angeles.In return, the Lakers sent young players Lonzo Ball, Brandon Ingram and Josh Hart to the Pelicans. The Lakers also sent three first-round draft picks, including the fourth overall selection in Thursday’s draft.Davis will join LeBron James to form a dynamic duo in Los Angeles. The team will also have payroll flexibility to try to build up the roster around the pair. New Orleans, meanwhile, will rebuild their roster around the young players acquired in the deal, as well as two of the top four picks in this year’s draft. They are widely expected to choose Duke star Zion Williamson first overall. They could use the fourth pick in the draft to select another young player, or trade it in the coming days.It remains to be seen when the team will make the deal official. If the trade call is held on July 6th, the earliest possible date, the Lakers would retain $27.8 million in cap space. If they wait until July 30th, LA would have $32.5 million to use in free agency.Waiting would also increase New Orleans’ cap space from $15 million to $19 million. Copyright © 2019, ABC Radio. All rights reserved.