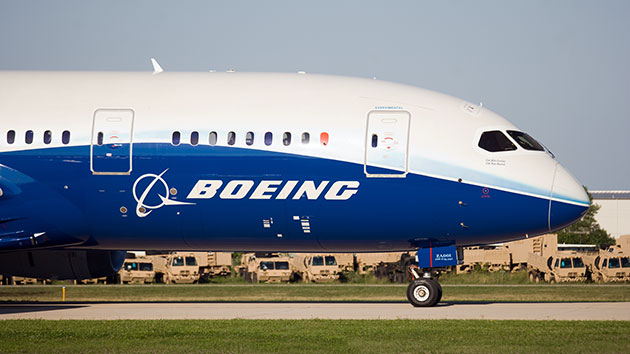 (CHARLESTON, S.C.) — A black employee at Boeing who says that he has found a noose hanging near his desk, signs near his workspace saying “n—–” and urine covering his desk on separate occasions says his work life remains “degrading” even after he complained to management, he told ABC News.Curtis Anthony, a quality inspector since 2011 at the 787 Dreamliner at Boeing’s North Charleston, South Carolina, plant, is suing the company for an alleged “racially hostile” work environment and for alleged retaliation after he complained about the alleged harassment.”I’m not really sure who I’m walking up to. I approach people and it affects my whole overall being there,” said Anthony, who is still employed by the aerospace giant. Even at home, the 57-year old said, “it affects me in a negative way.”In an emailed statement, a Boeing spokesperson wrote that while Anthony “is a valued Boeing South Carolina teammate, there is no validity to his allegations.”In his lawsuit, Anthony claims that starting in 2017 he was “subjected to racial harassment” at his Boeing workplace, including having white coworkers “urinate” in his “seat and on his work desk.””It was demeaning. I really didn’t want to work, so they had to move my desk, they had to move my chair. I really couldn’t perform the duties I am paid to do,” Anthony said. “I had to wait till they cleaned the area, brought me a new chair, a new desk.”Instead of focusing on work, Anthony said, “I was thinking about, ‘Who could do this? And why would they do this?’ To anyone, no matter what hue or race they are. It was just degrading and it was demeaning. I don’t know what their motive was, but I tell you right now, it still affects me to this day.””They did that and they used the n-word several times. You just hear people say that like it’s 1817,” Anthony said.He claims in a lawsuit filed on June 7 that he complained to management and subsequently faced retaliation by being moved to a building with no air conditioning.The company disputes that Anthony reported the alleged harassment incidents.The experience compelled Anthony to take medical leave and seek treatment for his stress under the Family and Medical Leave Act and a relapse in his sobriety, he asserts in court papers. He also enrolled in the company’s Employee Assistance Program. The lawsuit claims Anthony was retaliated against after returning from his leave and passed over for promotions in favor of “lesser qualified Caucasian workers.”Then, after working in New Orleans in January and February 2019, Anthony said he returned to work in the South Carolina plant in March to find a noose above his desk.”The significance and historical symbolism of hanging a noose over an African-American’s head is telling them you’re going to lynch them. It’s not only a symbol. It’s a direct threat of violence,” Anthony’s lawyer, Donald Gist, told ABC News.The Boeing spokesperson asserted that Anthony’s requests for leave were “consistently and repeatedly approved by the company.”Moreover, the spokesperson said “most of Mr. Anthony’s allegations were never brought to the attention of management, giving the company no opportunity to investigate these claims. The single issue he did raise was dealt with promptly and in a fair manner.”After receiving notice that a noose had been found near Anthony’s desk, the company investigated and fired the person responsible, the spokesperson said.A company statement at the time lamented the discovery of the “racially charged symbol” on the site and said “there is absolutely no place for racism and these cowardly acts in society and especially in our company.”Copyright © 2019, ABC Radio. All rights reserved.