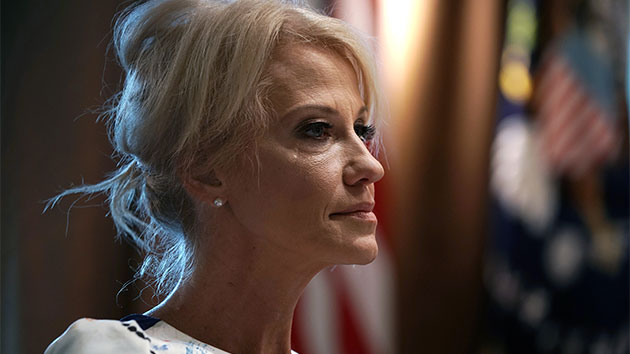 (WASHINGTON) — President Donald Trump rushed to the defense of one of his top political advisers on Friday, after a federal watchdog accused White House counselor Kellyanne Conway of violating a law that bars some government employees of engaging in political activity while acting in their official capacities.

In an unprecedented move, the Office of Special Counsel described Conway as a “repeat offender” of the Hatch Act and recommended she be removed from federal service.

“It looks to me like they’re trying to take away her right of free speech,” Trump said in an interview with Fox and Friends Friday. “No, I’m not going to fire her.”

It’s not the first time a Trump Administration official has been found to have run afoul of the 1939 law, but the most recent dramatic feud has left many with questions as to what exactly the Hatch Act is, whether it conflicts with First Amendment rights to free speech, and why those close to the president are able to allegedly violate it with no apparent consequences.

What is the Hatch Act?

The Hatch Act was originally passed in 1939 following allegations that employees of a New Deal agency dubbed the Works Progress Administration had used their official positions to benefit the Democratic Party. The act sought to outlaw bribery and coercion of voters by public officials and placed restrictions on federal employees from engaging in certain political activities.

It has been significantly amended in the decades since, and has withstood several challenges in front of the Supreme Court regarding concerns it overly restricts employees’ free speech rights.

Under the current version of the law, federal employees in the executive branch are prohibited from using their official positions “for the purpose of interfering with or affecting the result of an election,” according to the OSC. In past decades, the Hatch Act has been in the headlines in cases where top officials in the Trump, Obama and Bush administrations have been found to have advocated for a particular party or candidate while acting or being identified by their official titles.

The law generally doesn’t prohibit employees from acts such as placing campaign slogans or signage on their personal property, or expressing their political opinions at work as long as that isn’t done for the express purpose of engaging in campaign-related activity on behalf of a particular candidate or cause.

Federal employees deemed “further restricted employees” are held to different standards under the act, however, and generally face more stringent conditions regarding their abilities to engage in political activity like attending campaign events or conventions, or handing out fliers at polling places, for instance.

Can you be punished for violating the Hatch Act?

Yes. According to the OSC, all civilian employees serving in the executive branch of government — with the exception of the President and Vice President, are subject to scrutiny under the Hatch Act.

Federal employees found in violation of the Hatch Act by the independent Merit Systems Protection Board can face punishment such as removal from federal service, a point reinforced in Special Counsel Henry Kerner’s letter to Trump regarding Conway’s alleged violations.

“If Ms. Conway were any other federal employee, her multiple violations of the law would almost certainly result in removal from her federal position by the Merit Systems Protection Board,” said Kerner, who previously served under former Republican Rep. Jason Chaffetz on the House Oversight Committee and was appointed to the position by Trump in 2017. “Ms. Conway’s violations, if left unpunished, send a message to all federal employees that they need not abide by the Hatch Act’s restrictions.”

However, presidential appointees who are a part of the Executive Office of the President aren’t subject to the same accountability as other executive branch employees and can’t be punished or removed in the same fashion as the rest of the executive branch workforce.

In the case of close advisers to the president, as in Conway’s case, or even Cabinet officials, the final determination on how to handle Hatch Act violations is left in the hands of the President.

However, both of those officials released statements apologizing following the OSC’s investigations — while Conway has remained defiant and not apologized or even acknowledged her alleged violations, according to the OSC.

What is Kellyanne Conway accused of doing?

In his 17-page report to the president, Kerner chronicles what he describes as multiple blatant violations of the Hatch Act by Conway in TV appearances and activity on her Twitter account, @KellyannePolls.

The report followed a separate determination by the OSC in March of 2018 that Conway had violated the act when she advocated against Alabama Democratic Sen. Doug Jones’ candidacy in his race against Republican Roy Moore.

But that report did not sway Conway from changing her tune in multiple TV interviews this year, in which she attacked other Democratic candidates including Sen. Cory Booker, Sen. Elizabeth Warren, Beto O’Rourke and former Vice President Joe Biden.

One of the political tweets from Conway flagged by the OSC displayed a collection of pictures showing the faces of several female Democratic senators watching the president’s State of the Union Speech, that was captioned with “He’s got this. #2020I’mWithHim.”

“By engaging in political activity while speaking in her official capacity, Ms. Conway used her official authority or influence for the purpose of affecting the result of an election in violation of the Hatch Act,” the OSC report reads. “The sheer number of occurrences underscores the egregious nature of her violations.”

Kerner notes that Conway was recently confronted by a reporter in one instance where she engaged in political speech, to which Conway shot back sarcastically, “Let me know when the jail sentence starts.”

President Trump is far from the first person to question whether the Hatch Act puts a muzzle on what most Americans would consider First Amendment-protected speech.

But proponents of the law argue that it does a public service in separating the official functions of the U.S. government from the partisan battles seen in elections.

For instance, a majority opinion issued in a Supreme Court challenge to the Hatch Act in 1947 upheld the law on the basis that political activity could disrupt the very ability for government agencies to function, saying free speech had to be weighed against “the requirements of orderly administration of administrative personnel.”

Separately, advocates argue that allowing federal employees to mix their official duties with political advocacy risks corruption, and officials being able to wield their government titles in a way that elevates their voice over the common citizen.

That thinking appears to be reflected in Kerner’s report, in which he admonishes Conway as a “repeat offender,” and makes the case that if she isn’t subject to discipline it could diminish the OSC’s ability to enforce the act entirely.

“Ms. Conway’s conduct undermines public confidence in the Executive branch and compromises the civil service system that the Hatch Act was intended to protect,” Kerner wrote.