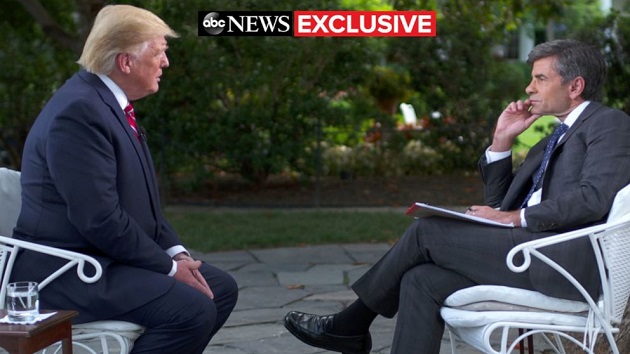 (WASHINGTON) — President Donald Trump is directly disputing the account of a key witness in special counsel Robert Mueller’s investigation into possible obstruction of justice during the course of the Russia probe saying that it “doesn’t matter” what his former White House counsel Don McGahn testified. In an exclusive interview with ABC News Chief Anchor George Stephanopoulos, Trump says McGahn “may have been confused” when he told Mueller that Trump instructed him multiple times to have the acting attorney general remove the special counsel because of perceived conflicts of interest.”The story on that very simply, No. 1, I was never going to fire Mueller. I never suggested firing Mueller,” Trump told Stephanopoulos.But when Stephanopoulos pushed back and referenced McGahn’s testimony, Trump was defiant.”I don’t care what [McGahn] says, it doesn’t matter,” Trump said.”Why would [McGahn] lie under oath?” Stephanopoulos later asked.”Because he wanted to make himself look like a good lawyer,” Trump said. “Or he believed it because I would constantly tell anybody that would listen — including you, including the media — that Robert Mueller was conflicted. Robert Mueller had a total conflict of interest.””And has to go?” Stephanopoulos followed up.”I didn’t say that,” Trump insisted.The special counsel’s report (Vol. II, page 80) undercuts Trump’s oft-repeated claim that Mueller was conflicted.At the president’s instruction McGahn is currently fighting a subpoena from the House Judiciary Committee to testify publicly about those conversations with Trump, among other things. McGahn spent nearly 30 hours with the special counsel’s investigators testifying under oath and was one of most quoted aides to the president to appear in the report.Trump also defended his decision not to sit for an in-person interview with Mueller’s investigators — something he had repeatedly said he would do — by expressing concern investigators were looking to catch him in lies or misstatements. He ultimately submitted written responses to questions from the investigators.And while Trump ultimately refused to speak to Mueller’s investigators directly about McGahn and other topics, he wasn’t shy about sharing his views with ABC News.”If you answer these questions to me now,” Stephanopoulos asked, “why not answer them to Robert Mueller under oath?””Because they were looking to get us for lies or slight misstatements,” Trump said. “I looked at what happened to people, and it was very unfair. Very, very unfair. Very unfair.”When Stephanopoulos pointed out that the president did not provide written answers to address questions of possible obstruction of justice, Trump grew frustrated.”Wait a minute,” Trump said. “Wait a minute. I did answer questions. I answered them in writing.””Not on obstruction,” Stephanopoulos said.”George, you’re being a little wise guy, OK — which is, you know, typical for you,” Trump shot back. “Just so you understand. Very simple. It’s very simple. There was no crime. There was no collusion. The big thing’s collusion. Now, there’s no collusion. That means they set — it was a setup, in my opinion, and I think it’s going to come out.”While Mueller did not reach a conclusion on obstruction, the 11 episodes of possible obstruction he investigated have been a central component to Democrats’ case for impeachment.The special counsel’s investigation did not find sufficient evidence to establish there was a conspiracy between the Trump campaign and Russia, but it did detail several “offers of assistance to the [Trump] campaign” by the Russian government. Mueller did not reach a conclusion about whether the president obstructed justice, the special counsel said, because charging the president with a crime was “not an option we could consider” because of Justice Department policy.The word “collusion,” itself, as members of Trump’s legal team have repeatedly pointed out, does not appear in the federal code.