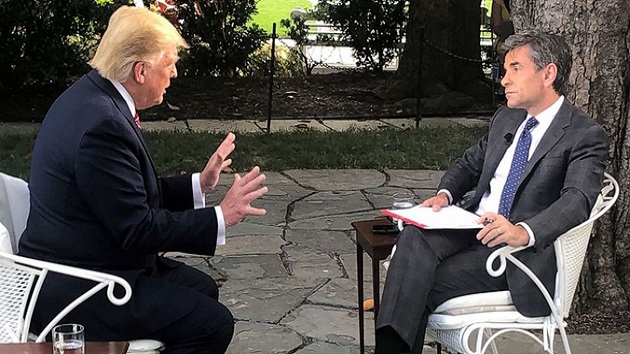 (WASHINGTON) — President Donald Trump on Friday appeared to try to walk back comments in an ABC News interview about his willingness to accept dirt on political rivals from a foreign adversary, telling Fox News that he would notify the FBI or the attorney general if the information was “incorrect or badly stated.”“Of course you have to look at it because if you don’t look at it you won’t know it’s bad,” Trump said on “Fox and Friends” Friday morning. “But, of course, you give it to the FBI or report it to the attorney general or somebody like that.”In an interview that aired Wednesday, ABC News Chief Anchor George Stephanopoulos asked the president if he would accept dirt from Russia or China if it were offered to him or turn it over to the FBI.The president responded, “I think maybe you do both.””I think you might want to listen, there isn’t anything wrong with listening,” Trump continued. “If somebody called from a country, Norway, [and said] ‘we have information on your opponent’ — oh, I think I’d want to hear it.”Trump’s comments were met with outrage by many on Capitol Hill, including close allies from his own party like Sen. Lindsey Graham, R-S.C. Graham said the president’s response was “not the right answer.”“If a foreign government comes to you as a public official, and offers to help your campaign giving you anything of value, whether it be money or information on your opponent, the right answer is no,” he said.In his “Fox and Friends” interview, the president claimed that he has had “a lot of support” for his comments.“Yeah, I’ve had a lot of support. I don’t think anybody would present me with anything because they know how much I love the country,” Trump said Friday.He then again conflated diplomacy with accepting dirt from opponents.“One thing that’s different with the president is I had dinner with the queen, I met with the prime minister of the UK, I was with the head of France, I was with the head of all the nations and I constantly am talking to them,” Trump said. “The president of France, am I suppose to report him to the FBI?”Federal Election Commission chairwoman Ellen Weintraud released a statement on Thursday evening to underscore that foreign assistance is illegal in U.S. elections.“Let me make something 100% clear to the American public and anyone running for public office: It is illegal for any person to solicit, accept, or receive anything of value from a foreign national in connection with a U.S. election,“ wrote Weintraub, a Democrat, in a statement. “This is not a novel concept.“Copyright © 2019, ABC Radio. All rights reserved.