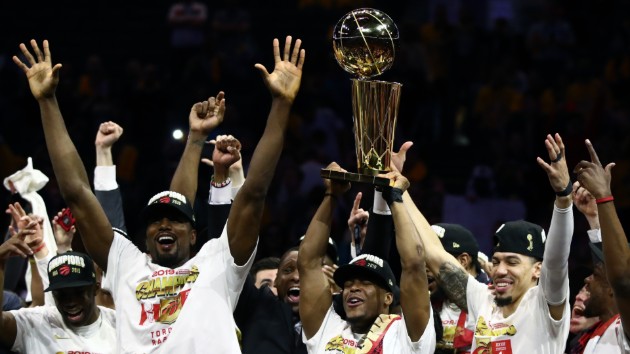 (OAKLAND, Calif.) — The Toronto Raptors are NBA champions for the first time.The Raptors defeated the Golden State Warriors 114-110 in Game 6 of the NBA Finals on Thursday night. The Raptors won the series 4-2, denying the Warriors what would have been a third straight championship.Kyle Lowry and Pascal Siakam had 26 points apiece for the Raptors, while Fred VanVleet and Kawhi Leonard each had 22 for Toronto.Klay Thompson scored 30 for Golden State but left with a knee injury. Andre Iguodala scored 22 points and Stephen Curry had 21 for the Warriors.When Curry missed a 3-pointer with about five seconds left, the Raptors tacked on a free throw off a technical in the last second when the Warriors called a time-out they didn’t have, and the last game at Oracle Arena was the last game of Golden State’s reign.Leonard was named NBA Finals MVP, the first player in history to win Finals MVP with teams from both conferences. Leonard won his first Finals MVP in 2014 as a member of the San Antonio Spurs.Copyright © 2019, ABC Radio. All rights reserved.

John Krasinski, Dan Levy, Regina King are the first ‘SNL’ hosts of 2021
As nursing homes get vaccine, assisted living centers are left ‘falling through the cracks,’ experts say
New York City postpones vaccine appointments as new shipments are delayed
Hospitals, businesses are offering incentives to those hesitant about getting COVID-19 vaccines
Here are all of the House Republicans who voted to impeach Donald Trump
Sarah Jessica Parker confirms the ladies of ‘Sex and the City’ are back for a revival