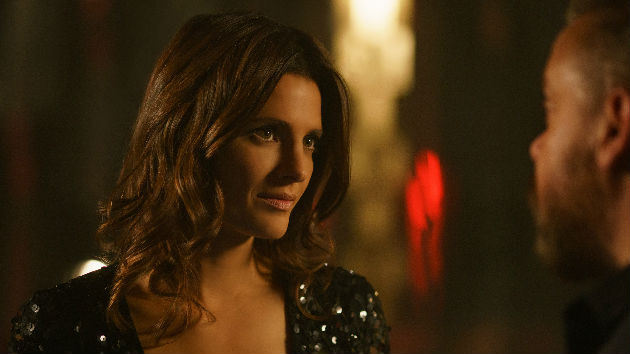 Castle, ABC’s romantic comedy cop show in which she starred with Nathan Fillion, ended in 2016, but lives on worldwide in syndication. Stana explains its success took her by surprise.

“I was kind of in a cave of work, and so I wasn’t aware of how much…it kind of embedded itself into people’s homes and into people’s hearts,” she says. “But I still feel it now. Which is kind of lovely, actually!”

Absentia, which Katic also produced, is very different. She plays an FBI agent who goes missing while hunting for a serial killer. Six years after being declared dead, she’s found alive, having survived a brutal regimen of psychological and physical torture, which includes repeated near drownings in a Plexiglas coffin.

Wracked with the psychological scars from her captivity, Emily returns to her life to find her husband remarried, and his new wife raising Emily’s son. She’s also the suspect in a series of murders that she isn’t entirely sure she didn’t commit.

“It was an interesting kind of challenge as an actor to …play [a] protagonist [who] may not have a clear cut morality,” Katic tells ABC Radio, calling Emily an “anti-hero.”

The first season ends with a stunning twist. “She has to question is that real or is that a part of this sort of psychosis? So at the beginning of season two…she’s now trying to figure out if she can trust herself.”

“Ultimately, she needs to go down this path which leads down some really murky and dark waters,” she says before laughing, because seeing running water triggers her character throughout the series.