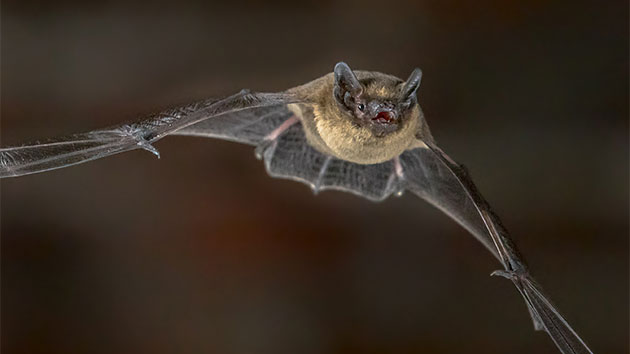 (NEW YORK) — When you think about rabies, you might consider dogs or raccoons to be the first ones to pass the viral disease, but according to a new report, you’re more likely to get it from bats.

Rabies is a deadly virus that, up until 1960, had been spread mainly through domesticated animals like dogs. Once they began getting vaccinated for the disease, however, wild animals became the main rabies hosts, causing about one to three human cases each year in the United States — a drop from over 100 deaths a year in the early 1900s, according to the Centers for Disease Control and Prevention (CDC).

“Reducing rabies in dogs is a remarkable achievement of the U.S. public health system, but with this deadly disease still present in thousands of wild animals, it’s important that Americans are aware of the risk,” CDC Director Dr. Robert R. Redfield, said in a press release for the agency’s new report.

The report’s authors looked at national rabies data from 1938 to 2018 and compared that to the number of people who underwent rabies treatment between 2006 to 2014.

Rabies is mainly spread through the saliva of an infected animal from a bite or scratch. It’s fatal over 99% of the time unless a person who believes they’ve been exposed to the virus receives a treatment called post-exposure prophylaxis before symptoms begin, according to the CDC.

“The first [symptom] is generally pain or tingling — like a bee sting,” Emily Pieracci, veterinary epidemiologist for the CDC and lead author of the study, told ABC News. “Soon after that, fever develops, followed by confusion [and] agitation. … People eventually die from going into a coma.”

Symptoms typically take about a month before they start to appear, Pieracci said, adding that anyone who has been bitten or scratched by a bat or other unfamiliar animal should not “wait and see” if symptoms appear before seeking treatment — they should go to a health care provider right away as a precaution.

Bat scratches, Pieracci said, can be less than 1 millimeter wide — smaller than the head of a pencil eraser.

That said, bats live in a diversity of environments, including in urban areas, people’s attics, lodges and campgrounds, Pieracci said. But while they can be found just about everywhere, she said that bats also “play a critical role in our ecosystem and it is important people know that most of the bats in the U.S. are not rabid.”

Pieracci emphasized that you can’t tell whether an animal has rabies just by looking at it. She said that problems arise when people handle bats because they assume they’re not rabid. The same goes for dogs you might see when traveling internationally.

“A lot of people think a rabid dog is salivating, aggressive,” Pieracci said. “But I have seen them shy [and] timid, and [then they] bite when you’re not looking.”