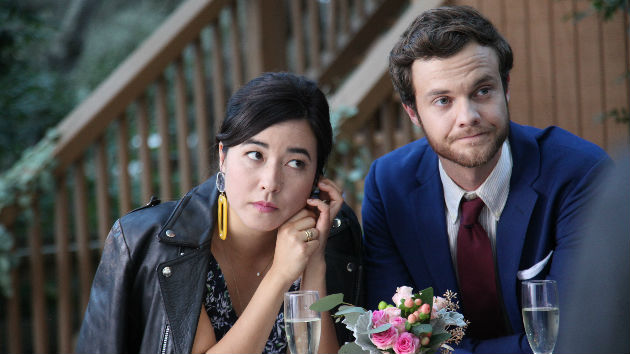 (NEW YORK) — Wedding season is upon us, and Plus One feels your pain.

The romantic comedy stars PEN15 actress Maya Erskine and Jack Quaid, son of Meg Ryan and Dennis Quaid, as Alice and Ben, two old pals who decide to be each other’s “plus ones” for a marathon of summer weddings. Alice is trying to get over an ex and Ben wants to find a fairytale romance, but their plans take an unexpected turn when they find themselves falling for each other.

Erskine and Quaid admit their friends aren’t quite getting hitched at the rapid pace of Alice and Ben’s friends, but they do offer some tips for anyone planning a wedding to make it more bearable for their guests.

“I just went to one, had a great raw bar let me tell you something about that,” Erskine says. “The crab, y’all. When you got good snow crab legs, you’re winning. And make sure you have a tarp if it’s outside and some heat lamps if it’s outside as well, and cold.”

For his part, Quaid has some key advice when it comes to the seating charts.

“I went to a wedding not too long ago where they were like, ‘It’d be fun if for the couples that are coming to the wedding, we separated them so they’re getting to mingle with other people,’” he says. “…I’m like, ‘No, hell no. I came here with my girlfriend — I want to sit next to her!’”

Plus One premiered at the Tribeca Film Festival in April, where it won the Narrative Audience Award. It hits theaters today.