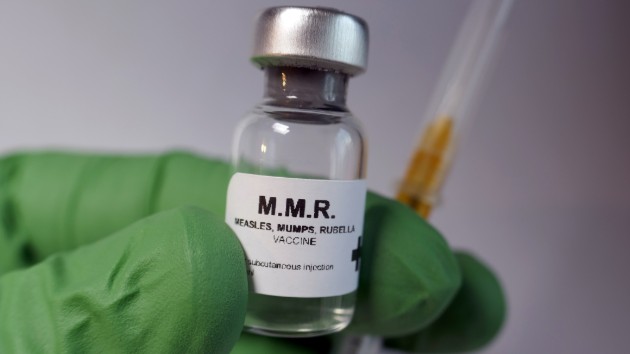 (NEW YORK) — New York is now the latest state to eliminate religious exemptions for vaccinations amid the ongoing measles outbreak. Gov. Andrew Cuomo signed the removal into law Thursday, noting that the Empire State is in the midst of the worst measles outbreak in more than a quarter of a century. Medical exemptions, which are relatively rare, will still be in place, but non-medical exemptions, including religious exemptions, would no longer be allowed in the state. “This administration has taken aggressive action to contain the measles outbreak, but given its scale, additional steps are needed to end this public health crisis,” Cuomo said in a statement. “While I understand and respect freedom of religion, our first job is to protect the public health and by signing this measure into law, we will help prevent further transmissions and stop this outbreak right in its tracks,” Cuomo said.This comes as communities across the country grapple with how to stem the tide of the growing outbreak, which has led to 1,022 confirmed cases across the nation so far this year, the Centers for Disease Control and Prevention reported earlier this week. Two areas of New York have the highest numbers of measles cases out of every outbreak in the country, the CDC numbers show. New York City has had 566 confirmed cases from September through June 3, while Rockland County has had 259 confirmed cases from an unspecified 2018 date to June 6. The CDC has not reported an outbreak in any other part of the state. A large portion of the confirmed cases in New York have been connected to areas with sizable Orthodox Jewish communities.In April, New York City Mayor Bill de Blasio issued an order demanding that all persons, starting at the age of 6 months old, who live, work or attend school within the specified zip codes of Williamsburg, Brooklyn, be vaccinated. Isaac Abraham, who is involved with Orthodox Jewish communities in Brooklyn and frequently speaks to the media on their behalf, told ABC News he felt the blame being attributed to the Jewish communities is unfair. Talking to ABC News in late April, Abraham pointed to de Blasio’s order, saying that the mayor mentioned the Orthodox Jewish community more than a dozen times in his press conference. Abraham said there were multiple reasons why some in the community do not vaccinate their children, including skepticism of government orders, frustration with how the city government has approached the issue, and not believing the vaccine will work. He added that the community has noticed an increased sense of anti-Semitism, as people, he said, appear to attribute the spread of the disease to the Orthodox Jewish community.The tactic of eliminating religious or non-medical exemptions in an effort to increase immunizations is not a new move. In Washington state, Gov. Jay Inslee signed a bill in May that removed residents’ right to cite philosophical or personal objections as a reason to be exempt from vaccines, but the state still allowed religious exemptions. Washington’s Clark County was at the center of the state’s outbreak, and personal exemptions were cited as the reason why 7.9 percent of kindergarten students were exempted in 2018, according to state records. California lawmakers removed non-medical exemptions in 2015 after a measles outbreak in the state, but now there is some public debate over proposed bills that would tighten the restrictions on medical exemptions.