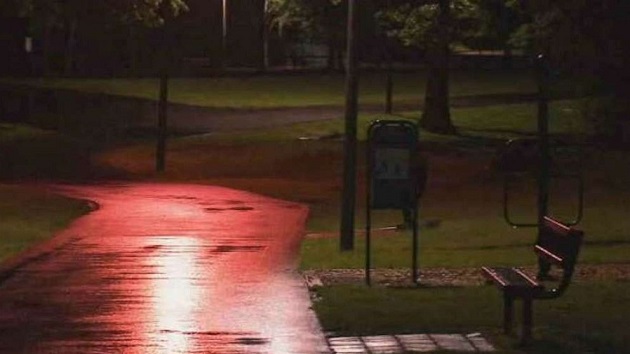 (FAIRFIELD, N.J.) — A New Jersey mother and her son escaped near tragedy on Thursday night when she was attacked by a coyote in a neighborhood park.The mother, 37, was pushing her son through Fairfield Recreational Park in Fairfield, New Jersey, at about 7 p.m. when she was attacked by the animal, according to police. Onlookers tried to alert the woman, who was bit on the leg while the animal knocked over the stroller.

“When she turned around basically the coyote lunged at her, bit her in the leg,” Fairfield Police Chief Anthony Manna told New York ABC station WABC-TV. “At that time the stroller turned over. The coyote went after the child and bit him in his leg. As other people were in the park they started to run to assist her. The coyote backed off. The woman was able to right the stroller and tried to flee, but the coyote again lunged — did not get her that time. He then fled into the woods.”The mother and son were taken to an area hospital for treatment. Both suffered only minor injuries.During a search of the area, Fairfield Police Sgt. Frank Tracey spotted a coyote in a nearby backyard.”The coyote turned around and started coming right at me, unfortunately I had to use force to put the animal down,” Tracey said.Police believe it is the same coyote that attacked the mother and son, but can’t know for sure.Coyotes do not generally attack humans, but the Humane Society will test to see if the animal was rabid.An adult male coyote can be about 40 pounds and run over 30 mph.The animal is common in New Jersey, with most sightings in the northwestern part of the state, but they’ve been spotted in every county in the state, according to the New Jersey Division of Fish and Wildlife.”Although attacks on humans are extremely rare in eastern states, as with any predatory animal they can occur,” according to the Division of Fish and Wildlife.People are being warned to remain cautious in the area and police will patrol the park with rifles on Friday as it is reopened to visitors. Copyright © 2019, ABC Radio. All rights reserved.