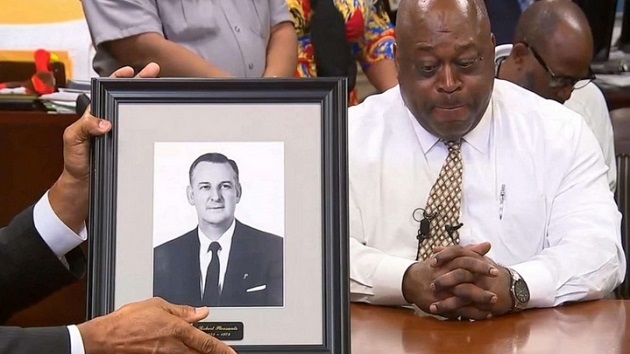 (RALIEGH, N.C.) — In 1952, two deputies in Wake County, North Carolina, hung Lynn Council, an African American man, from a tree when he wouldn’t confess to a robbery, according to ABC Raleigh station WTVD.On Thursday, the current Wake County sheriff, Gerald Baker, apologized to Council in person and took down a photograph of the man who was the Wake County Sheriff at the time of the attack.”They took me down to the woods to kill me,” Council, who is now 86, told reporters as the two men sat together. “That’s what they took me down there for, but things didn’t happen that way.””Jesus took over,” Council added.Baker said, “On behalf of the Wake County Sheriff’s Office, I want to apologize to you for what happened to you by members of this office.””I cannot change what they did and its effect on your life and this county,” Baker said, “but we’re here to let you know that this office is here to serve and protect each and every person that resides in this county.”Researchers estimate that between at least 100 people, and perhaps as many as 300, were lynched in North Carolina between 1882 and 1968, according to The News & Observer newspaper, which analyzed the state’s history of lynchings along with other newspapers.”I ask for your forgiveness of this office,” Baker said. “We’re here and we’re sorry that that happened to you from persons employed at this office.”Baker also presented Council with a key to the Wake County Sheriff’s Office.”You can come sit and spend the day with me, help me make some decisions,” the sheriff said.”You are officially and permanently a part of this office,” Baker told Council, before the two shook hands and embraced.”I appreciate everything,” Council replied.