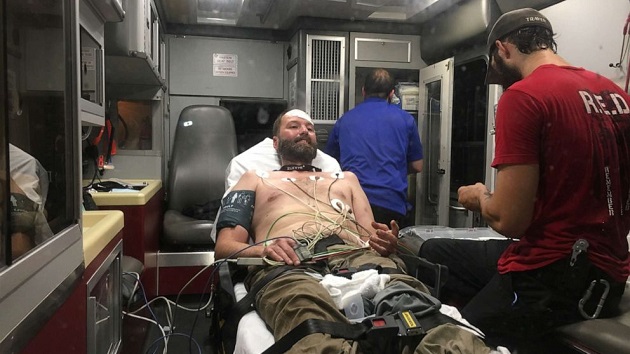 (NEW YORK) — Josh McClatchy knew finding water would be a problem if he was to survive after getting lost in the Arkansas woods last week. He did not anticipate the ants.”When it comes to the wildlife, I learned very quickly that the ants were my nemesis,” McClatchy told ABC’s Good Morning America in an interview airing Friday. “Ants that were an inch long, the stinger as large as the head.” McClatchy, 38, had planned his hike in the Caney Creek Wilderness region, near Mena, Arkansas, for weeks. But somehow the Dallas native managed to get off the beaten trail and disoriented. He texted his mother on June 1 to say he needed help, but due to spotty cellphone service he couldn’t reconnect with her.He was reported missing by his mother the same day.But he wasn’t seen for six more days, when a search-and-rescue helicopter finally managed to locate McClatchy in heavily wooded Polk County.”I wasn’t anticipating on being stranded; there’s no way I could have anticipated being stranded,” he said. “I don’t feel ashamed for being stranded. Reason being is that I’ve learned not only in that area, just hiking in general, people get stranded all the time.”He said he spent a few days near the top of Katy Mountain, on the Buckeye Trail, hoping the elevation would help him be seen. But the location also proved detrimental.”When you’re in the mountains and everyone is yelling, everything echoes so you can’t tell where the original sound is coming from,” McClatchy said.And then there were the ants.”I immediately got swarmed by ants, so I dropped everything and got out of there,” he said. “When I say I got out of there, I was around the general area, just trying to avoid the ants.””Thankfully I was in long sleeves,” McClatchy said. “That first night I learned to tuck everything in, so I had my wool socks and had my pants tucked in to my wool socks. I had long sleeves, I tucked everything in. It could have been much worse.”He stuck to following streams so he knew he would have a source of water. In the end, he came out in fairly good shape — for someone who spent almost a week on the mountain with no supplies.He was dehydrated when he was finally found and had suffered a cut on his head necessitating stitches. But otherwise, he was able to communicate with the rescue team and wear a smile as he was loaded into an ambulance.It took about four hours for the rescuers to carry him out the 3 miles on a one-wheeled rescue cart.”To be honest, when it comes to lost hope and despair, that had already set in by Monday,” McClatchy said. “The reason being, is because I was stranded Saturday night. Sunday was coming around, I wasn’t losing hope at that point, but I was definitely scared.”McClatchy called his rescuers “heroes” and thanked the hospital staff for being “absolutely amazing.” McClatchy, who has bipolar disorder, was without his medication for almost a week.”I’m in one of the best spots mentally that I’ve been in for a long time,” he said. “I have an incredible support team around me and I’m fortunate because not everyone has that,” he said. “My outlook is so different now, I’m so grateful.”