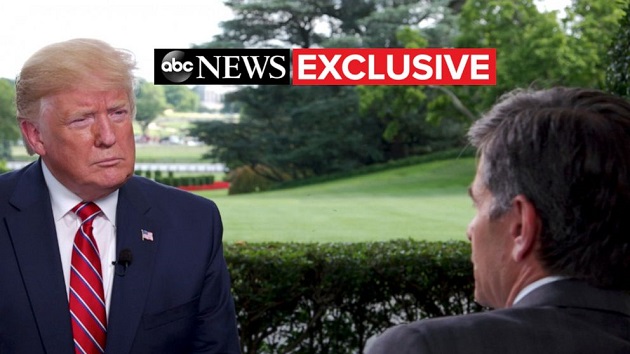 (WASHINGTON) — President Donald Trump slammed Democratic presidential candidate Sen. Kamala Harris for saying that, if elected, she would “have no choice” but to pursue criminal charges of obstruction of justice against a former President Trump. “Oh, give me a break. She’s running for president. She’s doing horribly. She’s way down in the polls,” the president said in reaction to Harris’ comments during his exclusive interview with ABC News’ George Stephanopoulos. “She said she would have no choice but to prosecute you,” Stephanopoulos said.The president was reacting to comments Harris, herself a former prosecutor who served as the San Francisco district attorney and California attorney general, made in an interview, suggesting that in her administration, the Justice Department would have to pursue criminal obstruction of justice charges.But even as the president blasted Harris’ comment, he also suggested he’d say the same thing if he were in her shoes.”I heard she made that statement. And you know what? Who wouldn’t? Probably if I were running in her position, I’d make the same statement,” the president said, casting Harris’ position as a political posture.He continued: “There was no crime. There was no Russia collusion. There was no Russia, I’ll put it in your language, conspiracy, which is even better than collusion.”The Harris campaign doubled down on its critique.”Donald Trump is using the Department of Justice to run interference on his own behalf, and he’s appointed an Attorney General to act like his personal defense lawyer, not the lawyer for the American people. Senator Harris believes no one is above the law, not even the President of the United States, and as president, she would restore an independent DOJ that values the rule of law and follows facts and evidence wherever they lead,” Ian Sams, Harris’ national press secretary, told ABC News in a statement.Special counsel Robert Mueller’s investigation did not find sufficient evidence to establish there was a conspiracy between the Trump campaign and Russia, but it did detail several “offers of assistance to the [Trump] campaign” by the Russian government. Mueller did not make a decision about whether the president obstructed justice, the special counsel said because charging the president with a crime was “not an option we could consider” because of Justice Department policy.The word “collusion,” itself, as members of Trump’s legal team have repeatedly pointed out, does not appear in the federal code.The president also reacted angrily to the statement that more than 1,000 former federal prosecutors from both Democratic and Republican administrations have signed onto stating that Trump would be charged with multiple felony charges for obstruction of justice if not for long-standing Department of Justice policy protecting a sitting president from prosecution.”I know more about prosecutors than you’ll ever know,” Trump said when Stephanopoulos pressed Trump to respond to the statement, countering that he could bring forward thousands of prosecutors to his defense.”They’re politicians. I could get you 5,000 that would also say that there’s nothing. I saw their names. And these are all, many of them, are Trump haters. Many of them if you look at the names,” the president said.Many of those names are Republicans, Stephanopoulos responded to the president.In continuing his defense, Trump specifically pointed to Harvard Law Professor Alan Dershowitz, who is a frequent defender of the president.”I could get you thousands of prosecutors that say this is the most unfair– you take a man like Alan Dershowitz, who’s a very brilliant guy. He thinks this is one of the worst things ever to happen to our country because I’ve been unfairly treated,” Trump said.The president continued: “Even a question like that’s unfair.””Mr. President, there’s nothing unfair about the question,” Stephanopoulos responded.Copyright © 2019, ABC Radio. All rights reserved.