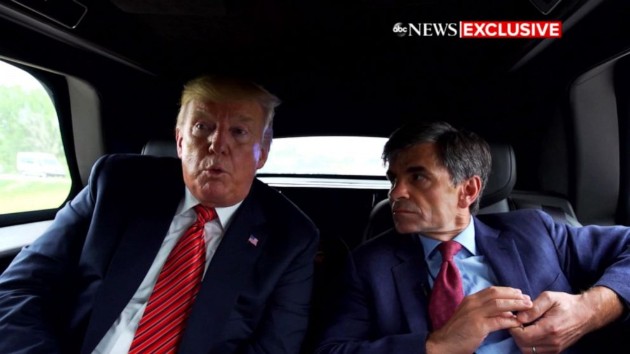 (WASHINGTON) — President Donald Trump slammed Federal Reserve Chairman Jerome Powell again this week, insisting that Powell’s actions have prevented the economy from soaring even higher and declaring he’s out of patience with the man he picked to lead the nation’s central bank. His comments — during an exclusive interview with ABC News Chief Anchor George Stephanopolous — were among his strongest yet aimed at the politically independent Federal Reserve. They add weight to concerns that the president could try to oust the head of the Federal Reserve, even if he isn’t successful. Powell has said he wouldn’t resign if asked by Trump. Speaking with Stephanopoulos in Council Bluffs, Iowa, on Tuesday, Trump said that the market would be stronger “if we had a different person in the Federal Reserve who wouldn’t have raised interest rates so much.” Trump’s repeated public criticism of the Federal Reserve potentially puts the chairman in an uncomfortable position. If Powell eventually does what Trump wants — even if he makes that decision independently without factoring in the president’s opinion — the board could be perceived as biased or politically tainted. At one point in the exchange, Stephanopoulos asks Trump whether he has concerns that his repeated commentary on the Federal Reserve puts Powell “in a box.” “Yes, I do,” Trump responded. “But I’m gonna do it anyway because I’ve waited long enough.”The Federal Reserve — which can raise or lower interest rates to slow down or stimulate the economy with inflationary concerns in mind — was created so as to operate independently of any political influence.While the president can appoint its chair and fill open seats on the board with governors serving 14-year terms, the Federal Reserve doesn’t need approval from the White House or Congress to raise or lower rates. Even its budget remains independent, with operations paid for through fees and income generated from the securities it owns. Firing a Federal Reserve chairman or governor for “cause” is feasible but also virtually unheard of. The last time a Federal Reserve chair clashed so starkly with a president was under President Lyndon B. Johnson, though the chairman at the time, William McChesney Martin, didn’t resign. In his interview, Trump said he was “allowed” to criticize Powell and claimed it was commonplace in the “old days” for a president to “settle” with the bank’s chairman.“You know, in the old days, they used to speak to the head of the Federal Reserve often,” Trump said. “And it was … very much a part of the administration from the standpoint as they’d talk and they’d really settle,” he said. “You have no idea how important it is.” Trump said he thinks the market could be 10,000 points higher if the Federal Reserve hadn’t hiked rates last year. At one point, Stephanopolous notes that Powell wouldn’t be in the job if it weren’t for him. “He’s my pick,” Trump acknowledged. “And I disagree with him entirely.”

John David Washington talks following in the footsteps of his Oscar-winning dad, Denzel Washington
Vanessa Bryant remembers Kobe and Gianna on one-year anniversary of their deaths
Stop accusing Jennifer Lopez of having Botox: “Please don’t call me a liar”
Biden says he will replace the entire federal fleet with electric vehicles
Dale Moss says “there’s no one person to blame” for ending engagement with ‘Bachelorette’ star Clare Crawley
Biden’s 1st 100 days live updates: Senators to be sworn in for Trump impeachment trial