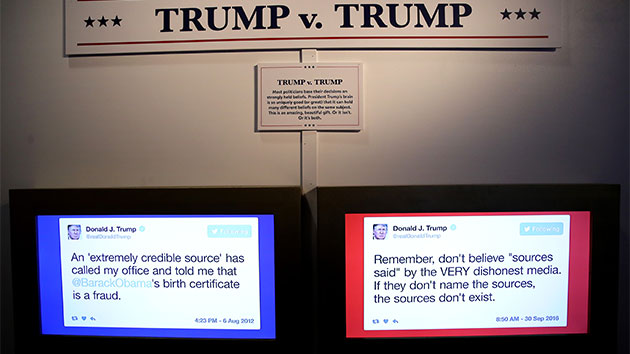 (WASHINGTON) — “Covfefe,” the word that had the country in a social media uproar when President Donald Trump tweeted it in 2017, was on display Friday along with many of his other tweets just in time for the commander in chief’s 73rd birthday.

The Twitter library launch marks the seventh one that the show has hosted in the country — making stops in Austin, Miami, Los Angeles, San Francisco, Chicago and New York City.

Desi Lydic, a Daily Show correspondent, told ABC News the show team began to wonder what the president’s library would look like if he had one, and the rest was history.

“We started realizing he doesn’t have a lot of paper documents, but he does have a lot of tweets,” Lydic said. “So, we decided to come up with a presidential Twitter library with President Trump’s most poetic and important tweets.”

“Probably covfefe,” she told ABC News. “I don’t know if it was misspelled…but it got us all talking so maybe that was its intent.”

The showroom is filled with Trump’s past tweets about the birther movement, Russia, special counsel Robert Mueller’s investigation into Russian meddling and nicknames for his most beloved colleagues.

“I think my favorite part is the Trump vs. Trump exhibit where we can see the president battling himself on Twitter through his own contradictory tweets,” said Ronny Chieng, a Daily Show correspondent.

In that exhibit, two digital displays show different contradictory tweets from Trump. On one screen, a tweet from April 2013 said, “The Time Magazine list of the 100 Most Influential People is a joke and stunt of a magazine that will, like Newsweek, soon be dead. Bad list!”

On the other side, a 2016 tweet about Time said, “Thank you to Time Magazine and Financial Times for naming me ‘Person of the Year’ — a great honor!

“The stats have actually showed that he’s slowed down recently — all the more reason to have a presidential Twitter library to kind of bring awareness back to his Twitter feed and make it great again,” Chieng said.

The president is still far from putting his Twitter fingers away any time soon, Chieng said, adding, “I’ll think he’ll continue using Twitter because it’s one of his most effective tools.”

Nearly a dozen ex-military members among those arrested in connection with Capitol riot
National Rifle Association files for Chapter 11 bankruptcy
Horn helmet-wearing, painted face Capitol rioter should remain in custody: DOJ
Two US COVID variants have been identified. What does that mean for vaccines?
Yelp to display user-generated COVID-19 safety reviews for restaurants
Self-described ‘QAnon shaman’ should remain in custody: DOJ