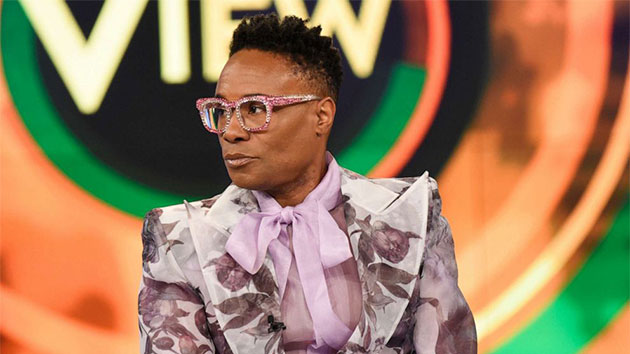 (NEW YORK) — Award-winning performer and fashion icon Billy Porter is known to captivate an audience with ease, but this time, he captured the audience with a warning about America’s future.

Friday on “The View,” the “Pose” star highlighted the importance of telling the story about the emergence of drag queen culture in society through his show.

More importantly, he shares that viewers might see strong similarities to the America we know today.

“Those that don’t know their history are doomed to repeat it. We’re in the middle of a crossroads in our country, in the world in general,” Porter said. “Democracy is at stake. People’s rights, people’s humanity continues to be up for legislation, which is ridiculous. We’ve seen this before.”

Porter said he “went straight to the frontlines to fight for our lives” after coming out in 1985. “I know what this looks like; I’m an activist. I know what it looks like; I’ve seen it before.”

When co-host Sunny Hostin asked Porter if he feels like he’s seeing these rights movements rising again, he quickly responded that he’s “seeing it again.”

“I stand on the shoulders of slaves. I know what it looks like; I know what that is,” he said. “Love still always wins. I might not be with you when we make it to the mountain top, but we gonna get there.”

Porter – who said he’s “always been a fashion person” – isn’t only winning Grammy and Tony awards; he’s also winning on the red carpet. He stole the show at this year’s Met Gala when he channeled Cleopatra and arrived on a literal pedestal.

“Women wearing pants is not a problem – anymore. It used to be, but it’s not a problem. We moved through that because pants are strong. They’re considered strong; they’re considered powerful; they are associated with the patriarchy,” Porter continued. “However, when a man wears a dress, very often people are disgusted.”

When Porter asked the co-hosts what it means when we see society accepting women wearing pants, but not men wearing dresses or skirts, Joy Behar responded it means “they hate women.”

After thanking Behar for acknowledging the gender role inequality, he said, “I’m done doing that. I’m done with that. I’m a man would wants to wear a dress and when I want to, I’m gonna.”

“The moment that I owned the totality of who I am by getting into that character, putting on those boots” Porter began about his role in “Kinky Boots” on Broadway, “Those heels made me feel the most grounded and the most powerful that I’ve ever felt in my life.”

Every episode of ABC’s award-winning talk show “The View” is now available as a podcast! Listen and subscribe for free on Apple Podcasts, Google Podcasts, TuneIn, Spotify, Stitcher or the ABC News app.

‘There is no plan B’ for Tokyo Olympics, IOC chief says
1,900 doses of Moderna vaccine destroyed after cleaner unplugs freezer in Boston
Coronavirus live updates: New cases, deaths in US down week-to-week
Vaccinating America is easier said than done: 5 things to know about Biden’s plan
‘The Boys’ is tackling one of the comic’s raunchiest storylines
Columbus to invest nearly $5M in police bodycams after Andre Hill shooting