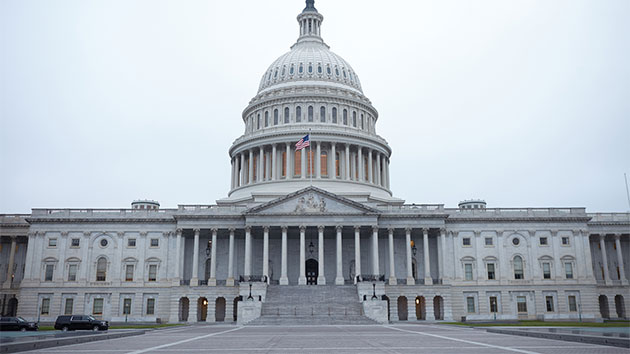 (WASHINGTON) — In the wake of President Donald Trump’s comments to ABC News that he would be open to foreign offers of political dirt on his 2020 rivals before maybe contacting the FBI, Democrats on Capitol Hill used the controversial remarks to renew their push for legislation targeting foreign assistance in American campaigns – a push that’s already run up against some Republican opposition.

In the House, Speaker Nancy Pelosi said representatives would take up legislation that would require candidates to contact the FBI if contacted by a foreign government offering political dirt during a campaign. That measure appeared to have Republican support, as Minority Leader Kevin McCarthy, who largely otherwise defended Trump’s remarks to ABC News Chief Anchor George Stephanopoulos, said Republicans would “gladly vote for this.”

But a similar measure in the Senate on Thursday hit a partisan wall after Sen. Mark Warner, D-Va., attempted to have the bill passed immediately and unanimously.

Sen. Marsha Blackburn, R-Tenn., blocked the measure, saying on the Senate floor that the reporting requirements in the legislation were “over broad.” In a statement later, Blackburn went further, saying that Democrats were trying to rush the legislation through Congress “without giving it a chance for the careful consideration and debate needed to address such an important issue” and calling Warner’s unanimous consent proposal a “blatant political stunt.”

Trump Friday revised his comments about foreign assistance, telling “Fox and Friends” that he would likely look at the material offered, but also report it to the Department of Justice or the FBI.

The back-and-forth over Trump’s original comments came amid a larger campaign by House Democrats to respond to special counsel Robert Mueller’s findings about Russian influence in the 2016 election and the Trump campaign’s response to those efforts.

Both the House Judiciary and Intelligence committees held hearings this week on elements of the Mueller report featuring legal and counterintelligence experts.

House Democratic leaders are currently reviewing other legislative proposals that could receive votes on the floor before the chamber’s August recess, potentially including pieces of HR 1, Democrats’ massive election security anti-corruption package passed earlier this year — which Republicans also have complained is also overly broad.

Another proposal would clarify election regulations surrounding foreign nationals involvement in elections. Under current rules, foreigners are prohibited from making financial contributions to American campaigns or donating any other “thing of value,” according to the Federal Election Commission.

“Whether or not you can establish monetary value, they have implied value, and those should be banned,” Rep. John Sarbanes, D-Md., said of opposition research.

Outside the political gamesmanship on Capitol Hill, the FBI, Department of Homeland Security and other U.S. agencies are racing to shore up America’s defenses ahead of a 2020 presidential race in which U.S. officials suspect Russia could make a return to attack America’s political process, potentially with other adversary actors as well.