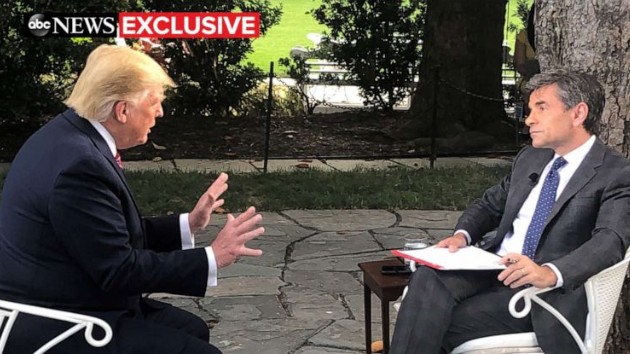 (WASHINGTON) — As the race for the 2020 presidential election heats up, President Donald Trump is taking aim at his prospective Democratic opponents and recent swing-state polling showing frontrunners on the left roundly beating him. “I don’t believe those polls. There’s no way [former Vice President Joe Biden] beats me in Texas,” Trump told ABC News Chief Anchor George Stephanopoulos on Tuesday during an exclusive interview. “No, my polls show that I’m winning everywhere.” But Stephanopoulos pushed back, highlighting news reports of polls commissioned by the Trump campaign that showed Biden, whom Trump referred to as “the weakest mentally” earlier this week, and several other Democrats ahead of him in key states.”Nobody showed you those polls because those polls don’t exist, George. Those polls don’t exist. I’m losing in 15 out of 17 states? Those polls don’t exist,” Trump said. “I just was given a meeting with my pollster who I frankly don’t even believe in pollsters if you want to know the truth, you just run a campaign and whatever it is, it is, but I just had a meeting with somebody that’s a pollster and I’m winning everywhere, so I don’t know what you’re talking about.” A poll from Quinnipiac University released June 5 showed Biden four points ahead of Trump in Texas. On Tuesday, the New York Times reported that the president, when shown internal polling data that had Democratic candidates ahead of him, instructed his aides to publicly say he is polling well. Sources familiar with the internal Trump campaign polling told ABC News the results surprised some members of the Trump team, particularly in states like Pennsylvania and Wisconsin where the data showed the president losing. By Wednesday, the matter was still on Trump’s mind.”On Good Morning America today they had phony polling information,” Trump told Stephanopoulos. “I explained to you last night that it was phony, but you didn’t do anything about it. You should have, but it was late in the evening and perhaps you didn’t get a chance.” “But, why does it bother you so much?” Stephanopoulos asked as the two entered the Oval Office. “Because, it’s untrue,” Trump shot back. “I like the truth. I’m actually a very honest guy.”