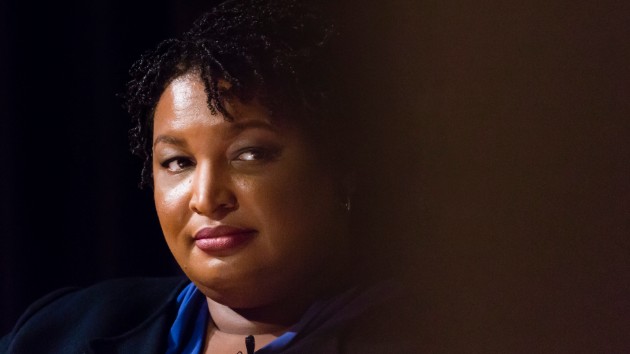 Elijah Nouvelage for The Washington Post via Getty Images
Posted on June 13, 2019 by ABC News

(LOS ANGELES) — As Republican Gov. Brian Kemp comes under fire from Hollywood for signing a ban on abortions after six weeks of pregnancy into law in Georgia, his former Democratic rival, Stacey Abrams, is asking the film industry not to abandon the state. Abrams met with a group of studio executives, celebrities, showrunners and the president of abortion rights group NARAL Pro-Choice America on Tuesday in Los Angeles amid some calls from production companies to boycott the Peach State over a law passed last month that bans abortions after a fetal heartbeat is detected — usually after six weeks of pregnancy. “We had productive conversations with execs, showrunners, actors & more. If companies #StayAndFight, we can save jobs, build power and most importantly, protect women. While the call to leave resonates for some, we must leverage the time before a final determination to lead,” Abrams tweeted Tuesday night.Abrams is a rising star in the Democratic Party, who lost a close race for governor last year, and is now urging activists to join the fight in getting Republicans who voted for the bill out of office to ensure that it never goes into effect if Roe v. Wade is overturned. By making the trip to Los Angeles, Abrams is ramping up her efforts to convince the film industry to support abortion rights groups on the ground, as opposed to boycotting the state which has come to be known as the “Hollywood of the South.” “Leader Abrams went to Hollywood to meet with industry leaders, show respect for the calls for a boycott and recognize the historical power of economic boycotts, but also to encourage a more strategic path for the film industry to help Georgia women: by using the energy and resources of the industry to stay in Georgia and fight to create lasting political change,” Abrams spokesman Seth Bringman told ABC News on Wednesday. “Brian Kemp has failed to show leadership and respect for film industry leaders who create jobs in Georgia, and he has threatened 92,000 Georgia jobs by this draconian forced pregnancy bill.”ABC News has reached out to the governor’s office, but multiple requests for comment were not returned. A NARAL spokeswoman called the meeting “dynamic and productive,” telling ABC News on Wednesday, “We look forward to continuing to find ways to fight back together, deploying both economic and electoral power to drive political change in Georgia and safeguard reproductive freedom.” The abortion ban, which was signed by Kemp in May, is one of a series of similar so-called “heartbeat” abortion bans recently passed in states like Kentucky, Mississippi, Ohio, Missouri, Louisiana and Alabama, which passed the most stringent law of all. But as Roe v. Wade remains the law of the land, these laws are facing legal challenges and none of them have gone into effect.Kemp, who was set to travel to Los Angeles in May to court film executives, canceled his trip amid a barrage of backlash from Hollywood and, according to a report from The Atlanta Journal-Constitution, he is expected to make the trip in the fall instead. Last month, Kemp dismissed calls for boycotts as a “squawk” from “C-list celebrities,” but threats to boycott have come from big names and big studios.”We cannot in good conscience continue to recommend our industry remain in Georgia if H.B. 481 becomes law, ” the letter says and includes signatures from fifty celebrities, including Amy Schumer, Don Cheadle, Alec Baldwin, Gabrielle Union. Mia Farrow, Uzo Aduba and Sean Penn.Several production studios and individual actors indicated they would not film in Georgia if the law goes into effect. Meanwhile, the Motion Picture Association of America (MPAA) told ABC News that they will “continue to monitor developments.”“Film and television production in Georgia supports more than 92,000 jobs and brings significant economic benefits to communities and families. It is important to remember that similar legislation has been attempted in other states, and has either been enjoined by the courts or is currently being challenged,” a MPAA spokesman told ABC News. “The outcome in Georgia will also be determined through the legal process. We will continue to monitor developments.” The MPAA represents the five major film studios in Hollywood — Walt Disney Studios, Paramount Pictures, Sony Pictures, Universal Pictures, Warner Bros., and Netflix. ABC News is owned by Disney. Late last month, Disney’s CEO Bob Iger hinted that the company may not film future movies in Georgia, saying it would be “very difficult” for the company to keep filming in the state if the law goes into effect.Ted Sarandos, Netflix’s chief content officer, took a similar position when asked about issue last month, telling Variety, “Should [the law] ever come into effect, we’d rethink our entire investment in Georgia.” And most recently, Jennifer Aniston and Luis Gerardo Méndez, who star in Netflix’s Murder Mystery, which films in Georgia, voiced their support on Tuesday for a boycott. But others have echoed Abrams’ strategy. Directors J.J. Abrams of Bad Robot Productions and Jordan Peele of Monkeypaw Productions announced in a joint statement last month that they will continue filming HBO’s Lovecraft Country in Georgia, but pledged to donate their salaries to the American Civil Liberties Union and Fair Fight Georgia. And on Wednesday, Planned Parenthood announced that Ariana Grande is donating $250,000 — the proceeds from her June 8 concert in Atlanta — to the organization.Copyright © 2019, ABC Radio. All rights reserved.