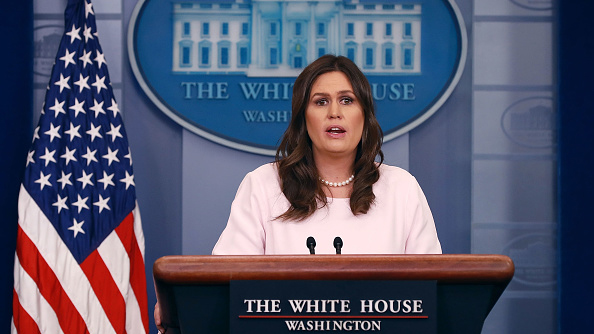 (WASHINGTON) — White House Press Secretary Sarah Sanders is leaving her post, President Donald Trump tweeted on Thursday.”After 3 1/2 years, our wonderful Sarah Huckabee Sanders will be leaving the White House at the end of the month and going home to the Great State of Arkansas,” Trump tweeted. “She is a very special person with extraordinary talents, who has done an incredible job! I hope she decides to run for Governor of Arkansas – she would be fantastic. Sarah, thank you for a job well done!”At an event aimed at highlighting hiring efforts for former inmates, Trump praised Sanders calling her “a warrior.””We’ve been through a lot together. She’s tough, but she’s good,” he said and added, “If we can get her to run for the governor of Arkansas, I think she’ll do very well.”Sources familiar say Sanders has not revealed whether she might consider mounting a political bid of her own back in Arkansas, but a personal familiar said there has been speculation among staffers in the White House about the possibility of Sanders pursuing a political career.Sanders described her role as “the honor of a lifetime.””This has been the honor of a lifetime, the opportunity of a lifetime… particularly to work for this president,” she said adding it is “something I will treasure forever .. loved every minute…even the hard minutes.”Sanders gathered members of her staff Thursday afternoon and informed them of her planned departure at that time. Sources familiar with Sanders decision to depart cited her desire to make the move back to Arkansas for the sake of her family. Sanders and her husband have three young children, all under the age of ten, and sources said she and her husband felt now was the right time to move the family and get them settled back in Arkansas during the summer school recess. Sanders was named White House press secretary in July 2017, just hours after Sean Spicer resigned from the position. She is the daughter of former Arkansas governor and two-time presidential candidate Mike Huckabee and grew up with a fascination for politics.“I always say that when most kids are seven or eight years old out jumping rope, she was sitting at the kitchen table listening to [political commentators] analyze poll results,” her father told Fox News in May of 2017.Sanders confirmed earlier this year that she has been interviewed by special counsel Robert Mueller’s team investigating Russian interference in the 2016 presidential election.“The President urged me, like he has everyone in the administration, to fully cooperate with the special counsel. I was happy to voluntarily sit down with them,” Sanders said in a statement to ABC after the news was first reported by CNN.One source told ABC News the interview happened around the same time that it’s believed other White House officials were being brought in for interviews.