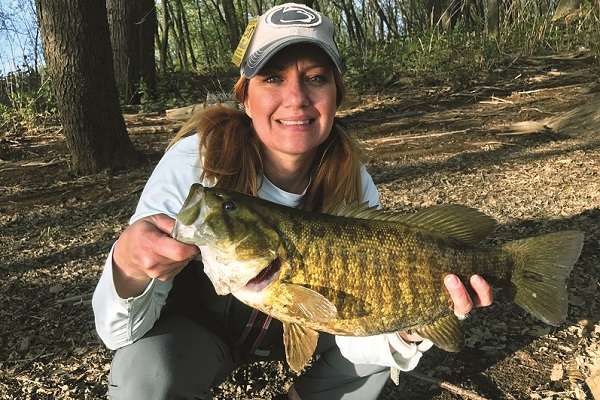 (Photo courtesy of the PA Fish and Boat Commission.)

Among Pennsylvania’s most abundant, adaptive and popular sport fishes, smallmouth and largemouth bass can be found in warm-water rivers, streams and lakes across the Commonwealth; while spotted bass inhabit the large, impounded rivers of southwest Pennsylvania. Notoriously aggressive feeders, bass can be caught on a wide variety of tackle including live bait, fast-moving spinners and topwater poppers.

“Bass fishing provides a fun challenge for anglers of all skill levels,” said Kris Kuhn, Chief of the Pennsylvania Fish and Boat Commission’s (PFBC) Division of Fisheries Management. “Whether you’re a kid casting a few lines from shore or a seasoned tournament pro motoring up and down the river, bass provide the kind of fight that will keep you coming back for more.”

To fish for bass, anglers must have a Pennsylvania fishing license, which can be purchased at www.gonefishingpa.com. Those interested in supporting PFBC bass-specific programs through a monetary donation may also purchase a voluntary bass permit. Permits are not required to fish and do not provide any additional privileges.

Following the annual No Harvest period from April 13 to June 14, anglers may begin to keep a daily limit of smallmouth, largemouth and spotted bass on lakes and flowing waterways, depending on regulation. Anglers should note that striped bass and hybrid striped bass are not included in the June 15 opening day and are subject to separate regulations.

On lakes managed under Commonwealth Inland Waters regulations, up to six bass measuring 12 inches or longer of combined species (smallmouth, largemouth and spotted) may be harvested daily from June 15 to October 31. From November 1 to December 31, and from January 1 to April 13 (2020), bass must measure at least 15 inches, with a daily limit of four.

On lakes managed under Big Bass Program special regulations, anglers may harvest up to four bass with a minimum size of 15 inches year-round, except during the annual No Harvest period.

On rivers and streams managed under Commonwealth Inland Waters regulations, up to six bass of combined species measuring 12 inches or longer may be harvested daily from June 15 to September 30. From October 1 to December 31, and from January 1 to June 13 (2020), bass must measure at least 15 inches, with a daily limit of four.

Year-round Catch and Release regulations apply to the middle and lower sections of the Susquehanna River from the inflatable dam near Sunbury to Holtwood Dam, and the Juniata River in Dauphin, Juniata and Perry Counties. These regulations also include all tributaries a half-mile upstream from the confluence.

Anglers fishing for bass within interjurisdictional waters managed by multiple bordering states, including Lake Erie, Pymatuning Reservoir, Conowingo Reservoir and the Delaware River and Estuary should reference the Pennsylvania Fishing Summary for seasons and regulations.

A list of Pennsylvania’s Best Bass Fishing Waters based on biologist population survey reports can be found here.