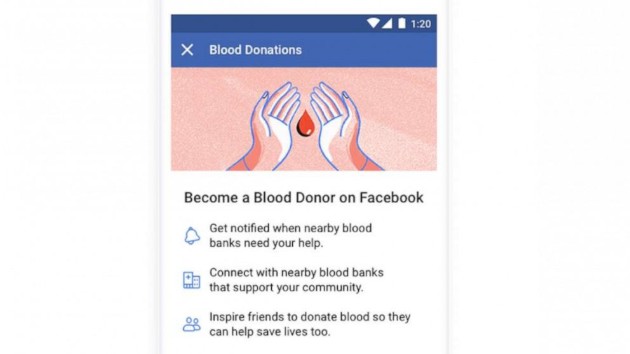 (NEW YORK) — Facebook is making a play for your blood. The social media giant launched a “Blood Donations” feature in the United States on Wednesday to connect blood donors with blood banks, including America’s Blood Centers, the American Red Cross, Inova, New York Blood Center, Rock River Valley Blood Center, Stanford Blood Center, Versiti and Vitalant, the company said in a press release. The feature launched initially in Chicago, New York City, the San Francisco Bay Area, Baltimore and Washington D.C., with a national roll out expected over the next few months. “Through our partnership with Facebook, individuals will be able to conveniently find and connect with their local blood center to help meet the ongoing need for a diverse pool of blood donors in the US,” said Kate Fry, chief executive officer at America’s Blood Centers. “By encouraging blood donation…each of us can assure that the more than 30,000 pints of blood used daily throughout the country is available.”Facebook users can sign up by going to the “About” section of their profile, then going to “Blood Donations.” Likewise, blood banks can request donations and send notifications to those nearby who have signed up.The new feature’s launch comes just ahead of World Blood Donor Day on June 14.Facebook has been organizing blood donors in Bangladesh, Brazil, India and Pakistan since 2017, citing more than 35 million people registered through the platform.”Blood donation centers in India and Brazil found that 20% of people said that Facebook influenced their decision to donate blood, according to in-person surveys conducted at partner blood banks,” the company’s product director of health, Hema Budaraju, wrote in the release.It’s unclear what the user privacy implications would be, experts said.”I would be suspect of a large powerful company intervening in public health processes,” Britt Paris, a researcher at the Data & Society Research Institute told ABC News. “At face value, it’s no different than the Red Cross running an emergency blood drive and running an ad on local radio but I think the fact that platform companies are always trying to gather data in order to disrupt public services would give me pause in this arena.”Lawyer and bioethicist Kayte Spector-Bagdady pointed out that people who would have the most personal data concerns could very well be those who cannot give blood because of prior health issues or medical conditions.”I will say that there are potentially health-related data hidden in who doesn’t sign up for this campaign. For example, the American Red Cross has an extensive list of people who cannot donate but, given that, many people will not sign up for this campaign anyway,” Spector-Bagdady said. “I reviewed the Blood Donation Terms on Facebook and they seem pretty standard, and also say that the terms are generally subject to Facebook’s Data Policy which, as we know, is broad.” Copyright © 2019, ABC Radio. All rights reserved.