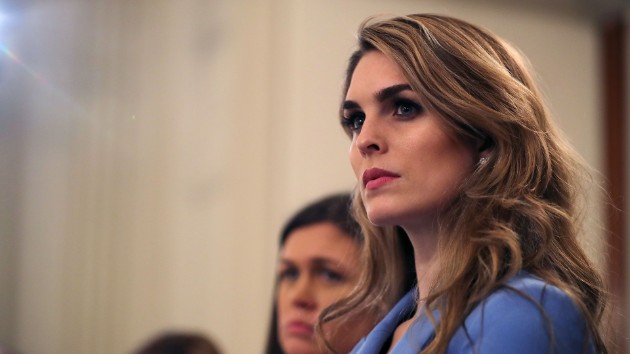 (WASHINGTON) — Former Trump aide Hope Hicks has agreed to testify behind closed doors before the House Judiciary Committee next Wednesday, according to the panel. “I am pleased to announce Hope Hicks will appear before the Committee for a transcribed interview. It is important to hear from Ms. Hicks, who was a key witness for the Special Counsel,” committee chairman, Rep. Jerry Nadler, D-N.Y. said in a statement on Wednesday. “Ms. Hicks understands that the Committee will be free to pose questions as it sees fit, including about her time on the Trump Campaign and her time in the White House. Should there be a privilege or other objection regarding any question, we will attempt to resolve any disagreement while reserving our right to take any and all measures in response to unfounded privilege assertions. We look forward to her testimony and plan to make the transcript promptly available to the public.”The White House had directed Hicks and a second former senior West Wing officials not to cooperate with House Judiciary Committee subpoenas for documents in the panel’s investigation into potential obstruction of justice by President Donald Trump, according to a letter the White House counsel sent to Nadler earlier this month.The committee issued subpoenas for documents and testimony from Hicks, the former White House communications director and Annie Donaldson Talley, the former chief-of-staff to Don McGahn, Trump’s former White House counsel, last month.When she left the White House in March of last year, Hicks was Trump’s longest-serving aide.Speaking to reporters in February of last year, White House press secretary Sarah Sanders said Hicks was not resigning because of her testimony before the House Intelligence Committee during which, according to a source familiar with the interview, she said she had occasionally told white lies on Trump’s behalf to the panel.“This is something she’s been thinking about for a while,” Sanders said, adding that Hicks was going to spend some time with her family.”Quit trying to make it into a scandal. Don’t try to read more into it than there is,” Sanders told reporters.Hicks’ comments during the nine-hour House committee interview were first reported by The New York Times.Hicks was questioned extensively about the controversial Trump Tower meeting between Donald Trump Jr. and a Russian lawyer in June of 2016, telling congressional investigators that she was not aware of the meeting contemporaneously, and first learned of it in July 2017, when The New York Times first reported on it, according to three sources with knowledge of her interview.She refused to answer questions about her role in crafting a misleading response to the initial New York Times report in July 2017, telling the panel she had been instructed by the White House not to answer questions pertaining to the transition or White House. She later answered some questions about the transition, given that she had done so in an interview with the Senate Intelligence Committee, Rep. Adam Schiff, the top Democrat on the committee, told reporters.Hicks was also critical of former Trump campaign chairman Paul Manafort in the interview, suggesting to congressional investigators that he wouldn’t have been campaign chairman if he was properly vetted, according to a source familiar with her testimony.Manafort was ultimately sentenced to a total of roughly seven-and-a-half years in prison following his conviction on charges of unregistered foreign lobbying, tax and bank fraud and witness tampering. Copyright © 2019, ABC Radio. All rights reserved.