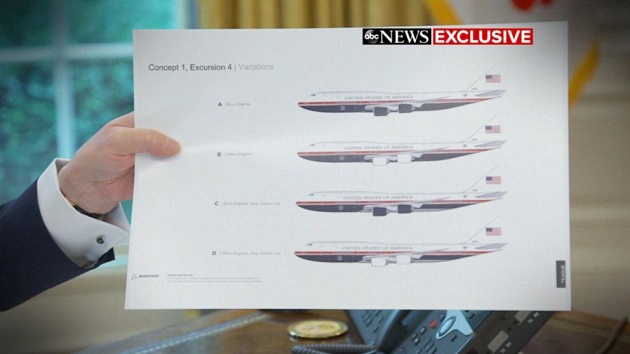 (WASHINGTON) — Less than a year after announcing a $3.9 billion makeover for America’s most famous aircraft, President Donald Trump shared never-before-seen images of Air Force One’s prospective redesign on Wednesday during an exclusive interview with ABC News. “George, take a look at this,” Trump boasted to ABC News Chief Anchor George Stephanopoulos, as he flashed mock-ups of his vision for the next generation of the presidential aircraft. “Here’s your new Air Force One.”Last July, Trump announced his intention to revamp the design of the aging fleet. But on Wednesday, during an exclusive interview with ABC News, Trump showed his plan to swap the iconic sky blue-and-white paint job for a patriotic red, white and blue.”We had different choices, here,” Trump said, pointing to images he said he designed himself. “These are all slightly different.””Air Force One” refers to any aircraft carrying the president of the United States and most commonly refers to a pair of Boeing 747-200B series aircraft.The current fleet comes with several modifications, including a presidential suite, medical operating room and a kitchen that “can feed 100 people at a time,” according to the White House.”Is the frame still a 747?” Stephanopoulos asked.”It’s a 747, but you know, it’s a much bigger plane,” Trump replied. “It’s a much bigger wing span.”In spite of his willingness to share the preliminary sketches, the president is still holding some details close to the vest.”There are a couple of secrets,” Trump teased. “You know what, there are a couple of secrets I don’t think we’re supposed to be talking about.”And despite the grandeur Trump has etched into his brand, his new aircraft may not have it all.”Everyone wants to know, is there a pod or not?” Stephanopoulos asked. “Seen the movie Air Force One? … The famous pod that flies out of the back?””Oh, I see,” Trump laughed. “But, yeah — no.”Before taking office, Trump criticized the “out of control” costs in the government’s initial contract with Boeing to revamp the fleet. The White House said last year that its new contract came in $1.3 billion lower than the initial proposal.”In fact, we added things,” Trump told Stephanopoulos. “And I got $1.6 billion off the price.”But the president’s patriotic new vision for the executive aircraft may face friction on Capitol Hill.On Wednesday, shortly after Trump showed ABC News the blueprints for Air Force One’s new paint job, lawmakers on the House Armed Services Committee voted to restrict spending on the renovation plans.”The president will have an opportunity to make some suggestions and changes to the plane,” Rep. Joe Courtney, a Connecticut Democrat who introduced the amendment, said Wednesday, noting “additional paint can add weight to the plane, additional fixtures inside can also add to cost and delays to the delivery of the plane.”Regardless of whether Trump gets his way, one thing is for sure: he will have to wait. The new fleet won’t be ready for takeoff until 2024.”I’m doing that for other presidents,” Trump said, “not for me.”