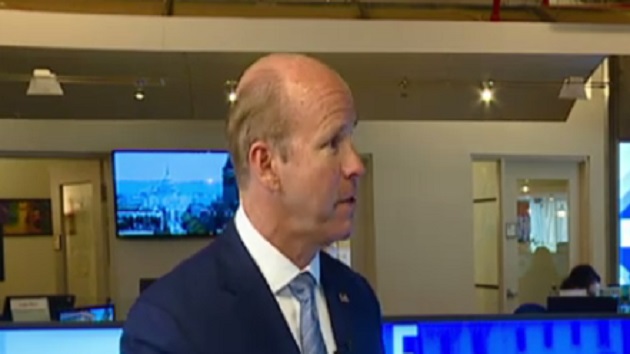 (NEW YORK) — Former Rep. John Delaney on ABC’s “The View” on Thursday weighed in on ABC News Chief Anchor George Stephanopoulos’ exclusive interview in the Oval Office with President Donald Trump saying the president’s response was “unpatriotic”.On Wednesday, Stephanopoulos asked whether Trump’s campaign would accept damaging information against his 2020 rivals during the upcoming presidential race from foreigners – such as China or Russia – or hand it over the FBI. Trump said, “I think maybe you do both.””It’s unAmerican. I mean that’s a really simple way of thinking about it. It’s unAmerican,” Delaney said. “It’s unpatriotic. “I think it’s against the law, but putting aside the law for a second is completely unAmerican.”Delaney appeared on the show to discuss his plan for winning his party’s nomination and the right to face off against President Donald Trump for the White House.The former U.S. representative for suburban Maryland announced his plans to run for president just six months after Trump’s inauguration in an effort beat the competition to Iowa and begin building support there, despite lower name recognition. Landing among the top finishers in February’s Iowa caucuses, Delaney has told ABC News, is the campaign’s top priority.In the wake of Wednesday’s deadline for polls that can affect who makes it on to the stage, Delaney appears to have made the cut by reaching 1% in at least three qualifying polls. He’s expected to continue his punches against Medicare-for-All, which attracted a chorus of boos at a grassroots event in San Francisco. The former congressman has declared his support for universal health care, but calls Medicare-for-All “bad policy and bad politics.”The event turned into an online squabble with New York Rep. Alexandria Ocasio Cortez who urged the more moderate candidate to “please sashay away.” Delaney, in turn, called for the first-term congresswoman to debate him on the subject, but she, through a spokesperson, responded “Lord no.””The problem with Medicare for all, it’s actually really simple, is that it makes private insurance illegal. And 150 million Americans have private insurance, and 70% of them like it according to polling,” Delaney said. “So if we want to actually create universal health care, we’re never going to do it by trying to get 150 million Americans to give up what they want.”