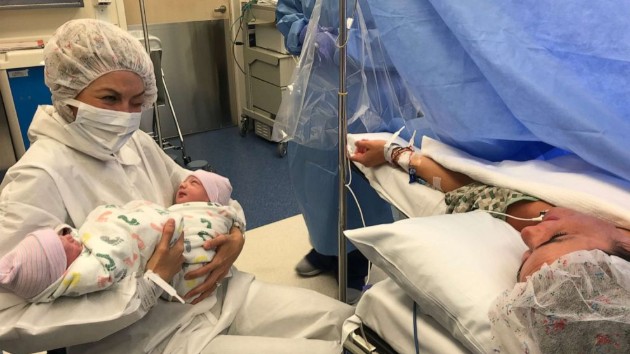 (PORTLAND, Ore.) — A woman who served as the surrogate for her sister has just welcomed two healthy babies. Whitney Bliesner is now a new mom to twins thanks to her own twin, Jill Noe, who carried the children for Bliesner due to a rare health condition that prevented her from doing so herself. Rhett, a boy, arrived at 8:06 a.m. on June 7 weighing in at 7 pounds, 11 ounces. His sister, Rhenley, was born at 8:08 a.m. weighing in at 4 pounds, 13 ounces.”The whole day was just surreal,” Bliesner, who lives in Portland, Oregon, told ABC News’ Good Morning America on Tuesday. “I got to do skin-to-skin with them. It was an amazing feeling. It was like a dream.” Noe gave birth at Providence St. Vincent Medical Center just outside of Portland.The twins arrived just two months after Bliesner and Noe’s story captured global attention in the news.”We had no idea it would blow up,” Bleisner said. “It’s amazing to share our story and how amazing Jill is — how she decided to stop her life for me just so I can have a family.””I’ve always been amazed by her, especially through this whole process,” Bleisner added. “She bounced back so quickly.” When she was a teen, Bliesner was diagnosed with neurofibromatosis type 2 (NF2), a condition that causes tumors to form in the brain, spinal cord and nerves, according to Mayo Clinic. She had a tumor removed in 1999, which caused her left eye to close. After undergoing chemotherapy and radiation, she completely lost hearing in her right ear and later lost 40 percent of hearing in her left ear, Bliesner said.In 2016, Bliesner married her husband Peter. The couple wanted to start a family, but Bliesner’s condition made it risky for her to carry children, she told GMA in April. “I have a 50/50 chance of passing my disorder onto my child,” Bliesner explained, adding that pregnancy hormones might increase tumor growth.”I didn’t want to risk getting any worse for my kids, I want to be able to take care of them,” she said. Bliesner went through her options and ultimately decided on surrogacy. She had a friend offer to carry her child, but that plan ended up falling through.That’s when her twin decided to step in and give her sister a selfless gift.”She was losing hope and I said, ‘I’ll do it,"” Noe told GMA.Donor eggs were used as Noe underwent in vitro fertilization. Noe became pregnant with twins during the second attempt.”It’s my best friend, someone I’ve come into this world with so it was really a no-brainer that I’d offer to be her surrogate,” Noe said of Bleisner. The Bliesners are now home with the kids and enjoying parenthood. “It’s so different and exciting,” Bleisner said, adding that she’s going to start baby books for her twins. “I can’t wait for them to say ‘Mom, [to] hear it for the first time.””I’m interested to see if they’ll have a connection with my sister,” she added. Noe told GMA Tuesday that it was a beautiful moment seeing her sister hold her babies for the first time.”I truly had no words and was just so happy and relieved everyone was healthy,” Noe said. “Pete and Whit are naturals when it comes to parents. Those kids are going to be so loved and it is beyond rewarding that I could help them become parents.”Copyright © 2019, ABC Radio. All rights reserved.