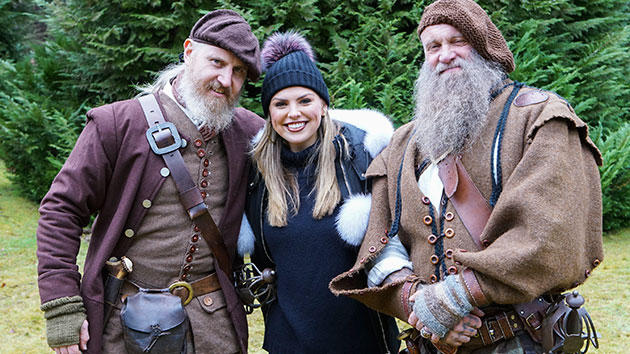 (NEW YORK) — The drama from last week continued on Tuesday night’s The Bachelorette on ABC as Hannah B. pulled bitter rivals Luke P. and Luke S. aside before the rose ceremony to “get to the bottom” of the bad blood between them. One will leave; the other’s fate is left hanging by a thread.

After a sit-down with the two guys proves futile, Hannah leaves the room even more confused. Host Chris Harrison asks the Lukes to join the other men, where he announces that Hannah has canceled the cocktail party and will move straight to the rose ceremony.

Before the first rose is handed out, though, Luke S. surprises everyone by taking himself out of the competition, explaining that he’s tired of constantly having to defend his character. He also has some parting words for Hannah: “Keep your eyes open for you know who.”

When the final rose is handed out, it’s John Paul Jones and Matteo who are sent home. The remaining men will have to put up with Luke P. for at least another week. Hannah, addressing the camera, explains that her “heart” wants him to stay, while her “head” says otherwise.

Hoping to leave the drama behind them, Hannah tells the remaining men they’ll be heading on an overseas adventure to Inverness, Scotland. Luke shatters the temporary bliss by proposing a toast to Hannah and the guys: “To finding your forever, and having the time of our lives while on the hunt.” Neither the men nor Hannah are eager to raise their glasses.

The first one-on-one date in Scotland goes to Mike, whom Hannah invites on a booze-filled tour of the country, while the “Luke Ness Monster,” as he’s nicknamed, gets a dressing down from the other guys for throwing Luke S. under the bus.

Meanwhile, after a fun day, Hannah and Mike settle down for an intimate dinner where they each open up about what brought them to The Bachelorette. For Hannah, it was finding her strength after a series of heartbreaks. Mike is also trying to bounce back from a broken heart after the woman he loved dumped him in 2015. He tells Hannah he’s “terrified” of falling in love, but assures her that he’s “ready to get down on one knee in a few weeks,” if he should be so lucky. Mike’s willingness to open up, and his vulnerability, earn him the date rose.

Devin, Tyler Jed, Dylan, Grant, Connor, Dustin, Peter, Kevin and Garrett are the next men selected for a group date, leaving Luke P. as the lucky recipient of the next one-on-one date with Hannah. However, in an about-face from his first group date, in which he declared he was “falling in love” with Hannah, he tells the guys he’s still seeking “clarity” in their relationship.

Next, the ten men, fitted with Scottish kilts, compete in the first-ever “Bachelorette Highland Games,” which consists of ax-throwing, a wrestling match, and a yoke race, where the guys race to see who can carry buckets of milk suspended from a piece of wood balanced on their shoulders without spilling any. Jed wins the competition and, after a series of steamy make-out sessions, the date rose.

Then it’s Luke’s one-on-one with Hannah, which comes with an invitation to “figure things out, one way or another.”  Addressing the camera, Luke says he “can’t see it going any other way than phenomenal” — but is he ever wrong.

Hannah gets right down to business, asking Luke why he’s so disliked by the other men. None of Luke’s answers seem to satisfy her, and his inability to open up or express any emotion finally has Hannah walking away in frustration. Dinner proves just as exasperating, as Luke still refuses to own up to his flaws, instead blaming everyone else for his predicament. After agonizing over her decision, the episode ends with Hannah finally telling Luke, “I can’t give you this rose.”

Will he stay or go home? We’ll have to wait until next week to find out, when The Bachelorette returns Monday night, June 17 at 8:00 ET on ABC.

Here are the 12 remaining men:

As nursing homes get vaccine, assisted living centers are left ‘falling through the cracks,’ experts say
‘Game of Thrones’ prequel, ‘Tales of Dunk and Egg’, in the works at HBO
Jane Krakowski loves ‘Dickinson”s spin on the poet
Olivia Jade returns to YouTube after over a year, “I can’t change the past”
‘The Boys’ is tackling one of the comic’s raunchiest storylines
Priyanka Chopra Jonas says the racism she suffered in high school forced her to leave America