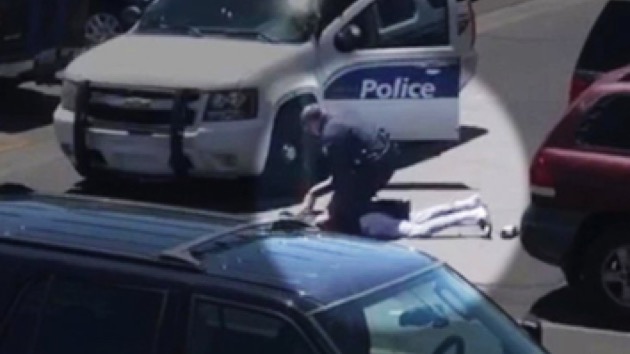 (PHOENIX) — The Phoenix Police Department has opened an investigation into how officers treated two shoplifting suspects, after a witness provided cellphone video showing one of the officers sweeping the leg of a handcuffed man as another points his gun at a car with two children inside.Police released the 10-minute video on Tuesday night when announcing the probe.”The Phoenix Police Department takes all allegations of misconduct seriously and for this reason, this incident is currently being investigated by the Professional Standards Bureau,” Phoenix Police Sgt. Tommy Thompson said in a statement.The video, which was given to police on Tuesday and intentionally blurred for redaction purposes, shows officers taking an unidentified man and woman into custody while investigating a shoplifting incident. The suspects were stopped in their vehicle in a parking lot a short distance from the scene of the theft, police said.The footage begins with a man lying face-down on the pavement as an officer cuffs his hands behind his back.The man can be heard repeatedly telling the officer, “I’m not doing anything.”The officer then yanks him up, slams him against a marked police vehicle and sweep-kicks his right leg out from under him.The officer can be heard yelling, “When I tell you to do something, you f—–g do it!””I’m sorry,” the man replies.”You’re not complying with me,” the officer shouts. “When I tell you to do something, you f—–g do it!””I am,” the man says. “I’m complying and everything.”The officer cuts him off, “Shut your mouth!”Meanwhile, another officer approaches the suspects’ vehicle and opens the back door with his gun drawn. A woman then steps out of the vehicle with two young children.The officer holsters his weapon and talks with the woman, who has a baby on her hip with another small child standing next to her.Another woman, who appears to be a bystander, comes to take the kids as an officer handcuffs their mother. The children can be heard crying.Both the man and woman were detained but neither were arrested, according to Phoenix ABC affiliate KNXV.The officer who swept the man’s leg was placed on a “non-enforcement assignment,” while the other officer who drew his firearm remains on normal patrol, Sgt. Thompson told KNXV.Copyright © 2019, ABC Radio. All rights reserved.