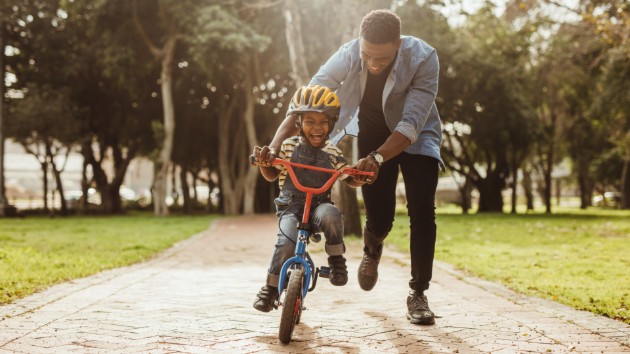 (NEW YORK) — Father’s Day is right around the corner — when paternal figures are honored and celebrated.But a new survey published by the University of Michigan’s C.S. Mott Children’s Hospital found that more than half of fathers believe they are judged harshly as parents. Overall, 52 percent reported receiving negative feedback about their parenting style, while 90 percent felt that they were actually doing a good job.The Mott Poll surveyed 713 men of children up through age 13, asking them to answer questions about how criticism impacts their parenting choices.Sarah Clark, a health and behavior specialist, and faculty member at the University of Michigan School of Medicine, was a lead researcher on the survey.”We’ve previously had a similar survey about mom-shaming, so we wanted to provide a balance with men,” said Clark.Of the fathers who reported being criticized about their parenting, 67 percent received criticism about discipline, 43 percent about diet and nutrition, 32 percent about paying too little attention to their children and 32 percent for being too rough.Clark said discipline is a common topic of disagreement between mothers and fathers, and concerns regarding discipline are most likely secondary to different parenting styles. She added, however, that having different parenting styles within a family doesn’t always mean that the father is wrong.”Different parenting styles can be a strength that fathers bring to parenting,” Clark told ABC News. “A father’s parenting style can be enriching to their children — help kids to behave positively and broaden their perspective of the world.”Regardless of parenting style, Clark’s advice to fathers is to establish common ground with their co-parent early on to strengthen their bond and work as a team.The University of Michigan survey indicates that 1 in 5 men are less motivated to remain involved with parenting duties when they receive harsh criticism. The survey also found that 40 percent of the criticism fathers receive is from their co-parent, with 25 percent from a grandparent.When criticism comes from someone who really knows you it may be more difficult to accept, according to Clark. And that’s why the fathers may not want to participate after being scorned.Clark emphasizes that when a father received regular criticism from his spouse, he was nine times more likely to want to be less involved: “People close to you often understand you the best, and when they relay negative feedback, if often pushes fathers away. Their confidence in parenting is lost and they often are less involved because they may feel like they are not a good enough parent.”While the Michigan survey found that 90 percent of fathers are confident as parents, many felt that adults in positions of power didn’t respect their parental role — 11 percent have felt that a teacher assumed they were not knowledgeable about their child’s needs or behavior, and 12 percent have felt that a doctor or nurse assumed they were not knowledgeable about their child’s health. Nearly one-quarter of fathers have felt excluded from communication about their child’s activities.Dominique Teasley of Alexandria, Louisiana, is a father of four biological children and two step children ranging in ages from 5 to 17. He told ABC News that when he receives criticism about his parenting, it is most often about disciplining his children, and like many fathers in the Michigan poll, he said he receives the most parental feedback from the people closest to him.”Many people think that I’m less strict towards my daughters compared to my sons,” he said. “I have a soft spot in my heart for my baby girl, but, I offer my sons plenty of emotional support and compassion.”Teasley said he is actively involved in his children’s education, and feels their teachers recognize this — and that’s part of his motivation to stay involved.The Michigan survey did not take into account the structure of a family, and answers from fathers may vary depending if they are a single parent, or part of a blended or traditional family.One of the more positive results from the poll is that more than half of fathers indicated that they are receptive to parenting feedback, and as a result they often seek out additional resources to improve their parenting. Copyright © 2019, ABC Radio. All rights reserved.