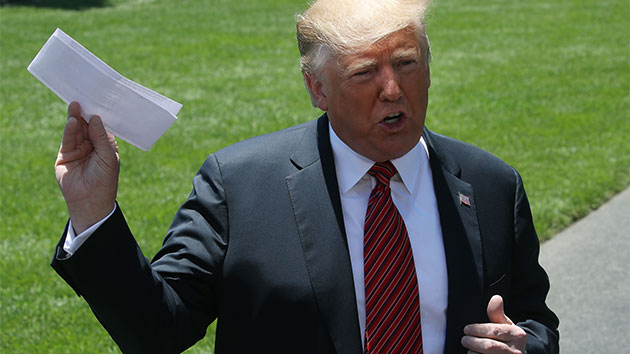 (WASHINGTON) — President Donald Trump continued to insist Tuesday that there is a secret component of his migration deal with Mexico, even flashing a piece of paper to reporters that he claimed spelled out the undisclosed portion.”In here is the agreement,” Trump said, pulling the paper from a coat pocket and repeatedly holding it up as he spoke to reporters. “Right here is the agreement, it’s very simple. In here is everything you want to talk about, it’s right here,” he said, without opening it up.”This is one page. This is one page of a very long and very good agreement for both Mexico and the United States,” Trump said.”Without the tariffs, we would have had nothing,” the president said.”Two weeks ago, I’ll tell you what we had: We had nothing. And the reason we had nothing is because Mexico felt that they didn’t have to give us anything. I don’t blame them. But this is actually ultimately going to be good for Mexico, too. And it’s good for the relationship of Mexico with us,” he continued.Trump said he couldn’t show reporters what was on the paper. “I would love to do it, but you will freeze action it. You will stop it. You will analyze it, every single letter. You’ll see. But in here is the agreement.”The president said that it’s his “option” as to whether the undisclosed agreement will go into effect.”It’s not Mexico’s, but it will go into effect when Mexico tells me it’s okay to release,” Trump said, adding that first Mexico has to ratify whatever agreement they’ve made. “It goes into effect at my option.”Washington Post photographer Jabin Botsford captured and tweeted a photo of the piece of paper, a portion of which can be read to say “the Government of Mexico will take all necessary steps under domestic law to bring the agreement into force with a view to ensuring that the agreement will enter into force within 45 days.”

“the Government of Mexico will take all necessary steps under domestic law to bring the agreement into force with a view to ensuring that the agreement will enter into force within 45 days.” @realDonaldTrump #Mexico agreement. Second photo flipped @washingtonpost @postpolitics pic.twitter.com/lWuJU9bpYK

Despite the president’s insistence that there is a secret deal, the Mexican government has denied that there are any undisclosed parts of the U.S.- Mexico deal.

“Outside of what I have just explained, there is no agreement,” Mexico’s Foreign Affairs Minister Marcelo Ebrard said on Monday.