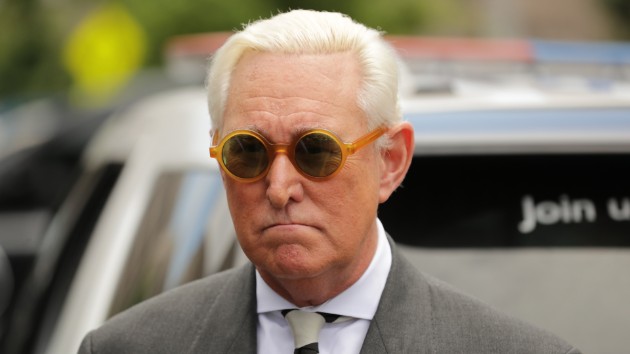 (WASHINGTON) — Decades before Roger Stone, the longtime adviser to President Donald Trump, became embroiled in special counsel Robert Mueller’s probe into Russian election meddling in the 2016 U.S. presidential election, he was a part of an investigation into possible obstruction of justice committed by a different commander-in-chief: President Richard Nixon.Stone — a Nixon enthusiast known for a tattoo of the former president’s face on his back — took a swipe at former Nixon White House Counsel John Dean’s credibility on Monday, as the pivotal figure from the Watergate scandal testified on Capitol Hill on the parallels between the investigations into Nixon and Trump. “I’m not certain why [Dean] was asked to testify today as I don’t know what his expertise is in the questioning. … I kind of think he’s clickbait,” Stone told the ABC News podcast, “The Investigation,” of Dean, who famously turned on his former boss in a scathing manifesto read aloud to the Senate Watergate committee investigating Nixon in 1973.Dean famously pleaded guilty to obstruction of justice in the cover-up of the Watergate scandal.Stone — who himself was the youngest person to testify in the same Senate hearings investigating the Watergate scandal — added, “[Dean’s] obviously a media star. He’s gotten a lot of airtime talking about the scandal based on his previous experience. So I assume he is testifying in order to bring attention to the hearings.”

[ READ THE FULL TRANSCRIPT OF STONE’S INTERVIEW ON “THE INVESTIGATION” ]

Stone added that the House Judiciary Committee asked his attorneys for his own possible testimony before Congress, but he maintained that he had to invoke his Fifth Amendment rights due to the ongoing legal proceedings he faces.Stone served as an adviser to Trump’s 2016 campaign but left amid controversy in 2015, and his experience on the 2016 campaign trail was partially documented in the Netflix documentary, Get Me Roger Stone, which focused on Stone’s eccentric political career.In January, Stone was arrested in a pre-dawn FBI raid of his Florida home on a seven-count indictment in connection with Mueller’s probe. Stone, who entered a plea of not guilty on all seven counts, faces charges including lying to Congress and witness tampering.In Stone’s indictment, Mueller’s prosecutors wrote that after WikiLeaks began releasing internal Democratic National Committee emails in the summer of 2016, an unidentified “senior Trump campaign official was directed to contact Stone about any additional releases and what other damaging information [Wikileaks] had regarding the Clinton Campaign.””Stone thereafter told the Trump Campaign about potential future releases of damaging material by [Wikileaks],” prosecutors allege in the court documents. Stone has vehemently denied any alleged involvement with the Wikileaks disclosures, and was not charged with conspiring with them.The federal judge presiding over Stone’s case put him under a gag order in February that prevents him from speaking publicly about the case, and therefore could not comment on a number of matters ABC News asked him about during the interview.Stone said he was underwhelmed by the ever-increasing pool of candidates vying for the 2020 Democratic presidential nomination.

“I don’t see a winner or a particularly strong candidate in this pack of Democrats. I think Joe Biden is an extraordinarily flawed candidate,” he said.As for Trump’s Republican primary challenger, former Massachusetts Gov. Bill Weld, Stone — a fan and friend of Weld’s — expressed skepticism about his viability as a Republican candidate powerful enough to unseat the president.”I have a very high regard for Bill Weld,” Stone said. “I have a even higher regard for President Trump and the extraordinary job he is doing. I don’t think he has any vulnerability in the Republican primary.”When asked if he’d help Trump in his 2020 bid for re-election, Stone told ABC News, “I certainly hope to be free to do so. As you know I have [pleaded] not guilty to all charges and I have vowed to fight for vindication at trial in November.”Stone’s next appearance in court is scheduled for July 19. Copyright © 2019, ABC Radio. All rights reserved.