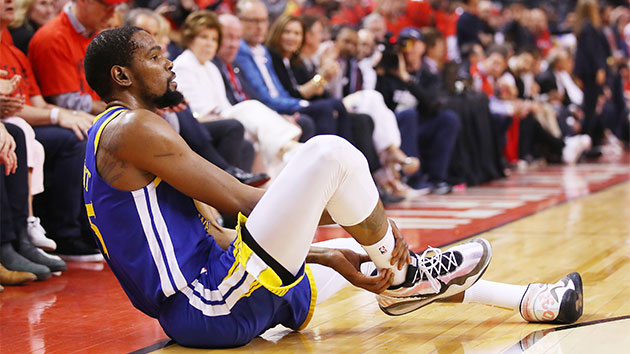 (TORONTO) — With the Golden State Warriors facing possible elimination in Game 5 against the Toronto Raptors, the night began as a perfect comeback for Kevin Durant, the team’s star forward. Before he took the court at the NBA Finals on Monday night, he hadn’t played since May 8, after he’d injured his right calf in a Western Conference semifinals game against the Houston Rockets. But in the second quarter, after scoring 11 points for the Warriors, Durant appeared to injure his right Achilles tendon.He was helped off the court by teammate Andre Iguodala as well as staff. Even famed Raptors fan and rapper Drake was seen patting Durant on the back as he made his way to the locker room.”He gave us what he had. He sacrificed his body and we know how it turned out,” said teammate Steph Curry after the game.In the end, the Warriors were able to hold the Raptors off from their first title win in franchise history, 106-105.But, there are now questions about whether the Warriors, hoping to win their third straight NBA title, might have brought Durant back from his calf injury too soon — and cost him what could potentially be the entire 2019-2020 season.Warriors general manager Bob Myers, who got choked up at times during a news conference after the game, said that Durant had gone through four weeks with the medical team.”He was cleared to play tonight. That was a collaborative decision. I don’t believe there’s anyone to blame. … But if you have to, you can blame me. I run our basketball operations department,” Myers said.In a post to his Instagram stories on Monday night, Durant remained optimistic, saying: “I’m hurting deep in the soul right now I can’t lie but seeing my brothers get this win was like taking a shot of tequila, I got a new life lol. #dubs.”And in a separate tweet from her own account, Durant’s mother told fans on Twitter that “This too shall pass.”

For ALL of you who question my son as a Man, question his Heart, question his Integrity and question his LOVE for the game of basketball, you DON’T know him. He has a heart of a true Warrior! This too shall pass. God Bless you ALL. pic.twitter.com/y0qcQ5Boga

The final series has not been without its share of drama.On Thursday, NBA officials banned a Golden State Warriors minority owner after video showed him shoving a player on the sidelines during the game.Mark Stevens, a venture capitalist, was sitting courtside during Game 3 of the NBA Finals in Oakland, California, when Raptors point guard Kyle Lowry dove into the sidelines to keep the ball from going out of bounds.As Lowry struggled to regain his balance, video showed Stevens giving him a shove to the left shoulder. Stevens was fined $500,000 and banned from attending games as well as Warriors team activities activities for a year, the NBA and Warriors teams officials said in a joint statement last Wednesday.Both teams face off again in Game 6 on Thursday in Oakland, California. It’s a game so anticipated, that floor seats are going for more than $100,000. Copyright © 2019, ABC Radio. All rights reserved.