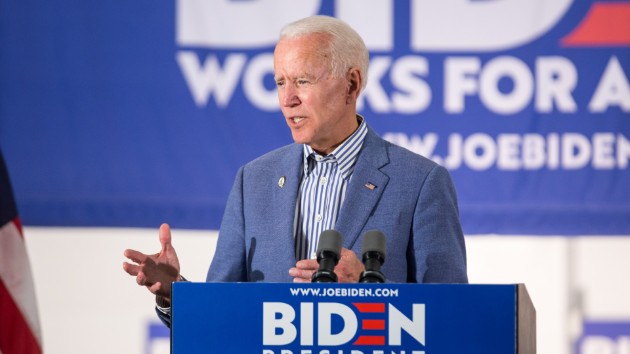 (WASHINGTON) — One key caucus state, two political rivals. President Donald Trump and former Vice President Joe Biden will both be in Iowa on Tuesday. In the western portion of the state, the president is scheduled to have two stops: a visit at a renewable energy facility in Council Bluffs and then an evening state Republican fundraiser in West Des Moines.Biden will head to eastern Iowa, on the heels of a weekend visit by most of the Democratic field, but which Biden skipped. There, the former vice president has three community stops on his public schedule, in Ottumwa, Mt. Pleasant and Davenport.While the two are unlikely to cross paths in the crucial caucus state, their visit will bring heightened attention to the Hawkeye State, given each candidate’s propensity to speak off the cuff and their ongoing public spats.Polls show a tight race in a hypothetical match-up between Trump and Biden — making Iowa an important swing state for both parties.Biden takes on TrumpBiden will make his second trip to Iowa since announcing his presidential run back in April, making his pitch to voters during three events Tuesday across eastern Iowa.The former vice president will also take part in a public event on Wednesday morning in Clinton, before heading to Chicago in the afternoon.One thing is abundantly clear about Biden’s message this time around: He plans to address being in the same state as Trump head on.”You know, Donald Trump and I are both in Iowa today. It wasn’t planned that way, but I hope Trump’s presence here will be a clarifying event,” Biden wrote in prepared remarks for his event in Davenport, which will take place while the president attends a fundraiser for the Iowa GOP party.Biden’s remarks, released early by the campaign, mark some of Biden’s most pointed attacks of the president — mentioning his name 44 times, and hitting Trump for his tariff policy and the impact it has on Iowa farmers and manufacturers.”Trump doesn’t get the basics. He thinks his tariffs are being paid by China. Any beginning econ student at Iowa or Iowa State could tell you that the American people are paying his tariffs. The cashiers at Target see what’s going on; they know more about economics than Trump,” Biden plans to say.Biden also plans to hit Trump for his health care policy and denial of climate change.”[S]till Trump denies climate change. What did he tell Piers Morgan in that interview? ‘Well the weather goes both ways,"” the former vice president is set to say.”It reminds me of when he tweeted in the winter that since it was cold outside there was no climate warming. Or how about when he said the way to deal with California’s fires was to rake the leaves? It would be funny if it wasn’t so serious,” he’ll continue.Biden has attempted to take on Trump from the start of his candidacy, calling out the current administration in his announcement video and at his campaign’s kickoff rally in Philadelphia, calling the president the “divider-in-chief.”But while Biden has been eager to take on the president in his campaign, he’s largely stayed away from large gatherings with his fellow 2020 rivals.Biden did not attend the Iowa Hall of Fame dinner Sunday night alongside 19 other 2020 candidates, staying instead in Washington to celebrate his granddaughter’s high school graduation.While in Iowa last weekend, Biden’s opponents mostly refrained from calling the former vice president out by name, instead making veiled swipes at him for his “middle ground” policies and calls for a “return to normal.”Biden will address those comments during his own trip to Iowa.“[I]t’s clear that Trump is shredding what we believe in most. I believe we have to restore those basic values. I gather some people think that’s a return to the past. I don’t see it that way. I see it as embracing the enduring values that have made America – America. I don’t think that’s taking us into the past. For me, it’s the only way America is going to have a future,” he plans to say.A new CNN/Des Moines Register poll shows Biden still leading the crowded Democratic field in Iowa, with 24 percent of likely Democratic caucus voters naming the former vice president as their top choice.But in the new poll, Biden failed to add to his lead from a statewide poll in March before he officially entered the 2020 race.The last time Biden ran for president in 2008, Iowa provided the final blow to the Delaware senator’s campaign. Biden dropped out of the race one day after the Iowa caucus, after failing to receive 1 percent of the vote.Biden would re-enter the race a few months later, joining former President Barack Obama — who won the Iowa caucus that year — as his running mate.

Trump to talk farm policyIn Council Bluffs, Trump is expected to tout his plan to allow year-round sales of gasoline mixed with 15 percent ethanol, as well as his administration’s farm policies. Later that day, he will attend a private fundraiser hosted by the Iowa GOP.”We’ve got more demand than we do seats,” Jeff Kaufman, Iowa’s GOP chair told ABC News.The state’s Republican party, which is expecting about 800 people to attend, scrambled to prepare with seven-days notice and advertised the dinner as “intimate.””I know Joe Biden is coming at the same time, but you know what? He’s going to be drowned out,” Kaufman said. “Poor Uncle Joe, I hope he finds a dinner somewhere where he can talk to three or four people.”Iowa, known for its first-in-the-nation caucus, will still hold a GOP caucus in 2020 — giving Republican voters an opportunity to vote against the president.”I don’t really expect [the president] is going to have any competition in Iowa but we still have to have our caucuses,” Kaufman said.Kaufman said the caucus is a way for the Republican state party to build their infrastructure, especially as they gear up for a statewide Senate race and four competitive Congressional seats.”People have asked me if he doesn’t have any competition why have the caucus? And I say, well, 2024. We have [to be] ready in 2024 when there will be competition and we can’t take a cycle off,” he said.But the state GOP did not hold a caucus for the last three Republican incumbents.For Republicans, the winner of the Iowa caucuses has only clinched the presidency, since 1980, just once: George W. Bush in 2000. Trump placed second, behind Sen. Ted Cruz, R-Texas, in 2016.It’s set to be a busy week for the Republican Party, with not only a stop from the president but also former U.S. Ambassador to the United Nations Nikki Haley, who will also be in town for a fundraiser for Sen. Joni Ernst, R-Iowa.”I’ll take Nikki Haley and the president of the United States any day over 27 of these left-wing Democrats,” said Kaufman, who will emcee Ernst’s event later in the week.Ernst has cautioned against some of the president’s decisions, most recently his strategy of threatening tariffs on Mexico. Still Kaufman said the party is strong and united.”She is able to voice her concerns. She is able to disagree with this president and he listens and he still respects her. No, we’re not a monolithic machine here where we all say the same thing … we actually can disagree and can debate,” he said.A reversal and a rejoiceThe former vice president will have to get past his 22 other opponents before facing off with the current president but Biden’s recent shift to the left on an anti-abortion measure has raised questions on Biden’s primary strategy, and has the Trump campaign ready to pounce.In recent days, the Biden campaign has been on the defensive after the former vice president said he no longer supported the Hyde Amendment, which bans the use of federal funds for abortions except in cases of rape, incest or where the mother’s life is at risk. The switch came just one day after his campaign said he did support the measure.Biden’s initial support drew a wave of criticism from his 2020 opponents, because it largely affects patients who are on Medicaid, meaning low-income patients have to pay for an abortion out-of-pocket.The reversal marked a leftward shift for Biden, who has been viewed as a moderate candidate and has campaigned on his ability to work across the aisle. The shift also raised questions about Biden’s ability to withstand attacks from progressive challengers and grassroots movements.And following his reversal, the Trump campaign — bolstered by pro-Trump groups — also piled on the criticisms, dinging the Democrat for what appeared to be a critical shift to the left.”He’s just not very good at this. Joe Biden is an existential threat to Joe Biden,” Tim Murtaugh, Trump’s campaign communications director, told ABC News in a statement.America First Action Super PAC and America Rising PAC, both major pro-Trump groups, flooded Twitter with messages calling out Biden’s reversal just minutes after news broke regarding his new comments.A senior adviser for the Biden campaign told ABC News that the political pressure from other 2020 candidates did not have an impact on Biden’s decision, saying, “there were spirited discussions about the Hyde Amendment over the last couple of weeks” but that ultimately the decision came to a head last week and Biden decided to address it in Atlanta.The former vice president’s reversal on the Hyde Amendment is exactly the kind of shift to the left that the Trump campaign and these pro-Trump groups have been waiting for, according to conversations with those groups. Many who are working to re-elect the president have been betting that Biden would need to limp further and further toward progressive policies just to escape the primary, and the former vice president’s reversal on the Hyde amendment is the best example of that so far.Copyright © 2019, ABC Radio. All rights reserved.