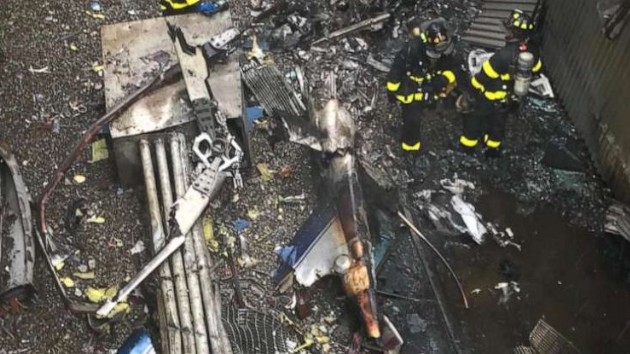 (NEW YORK) — The man at the controls of a helicopter that crashed onto the roof of a high-rise building in New York City on Monday afternoon died putting “other lives first,” his family said.The pilot, Tim McCormack, was the only person on board the privately-owned Agusta A109E chopper when he made a hard landing atop the AXA Equitable Building. The crash, which took place in a busy part of Midtown Manhattan, just blocks from Times Square, sparked a fire and caused fuel to leak from the aircraft, according to police and fire officials.No one else was harmed.”Our family lost a great man today when my brother lost his life doing his job,” the McCormack family said in a statement to ABC News on Monday night. “My brother Tim was a professional helicopter pilot who worked in private transit and was a flight instructor as well. He was a caring and compassionate man who put others first over himself. Tim died when in my opinion he put other lives first over his by using his skill as a pilot to emergency land his helicopter on a roof of a building so that it didn’t impact anyone else’s life except his own. My brother was a true hero.”The hard landing was believed to be an accident and there’s no indication of terrorism, a senior official with the U.S. Federal Aviation Administration told ABC News.National Transportation Safety Board (NTSB) officials have declined to discuss what may have caused the accident.The pilot was not in contact with air traffic control and was not required to be in contact for his flight plan, according to the NTSB.However the hard landing occurred inside an area of Manhattan with flight restrictions that require pilots to get permission from air traffic control to enter, FAA officials told ABC News.The crash — which took place shortly before 1:45 p.m. — came on a rainy New York afternoon. Both Newark and LaGuardia Airports were in a ground stop due to visibility and thunderstorms, according to the FAA.”Should the helicopter have been flying [in that weather]? I don’t know yet,” Doug Brazy, an NTSB air safety investigator, told reporters on Tuesday.McCormack first took off on Monday from Westchester County, New York, with one passenger on board, Brazy said. McCormack flew to Manhattan where the passenger got off the chopper, he said. That passenger has been interviewed and said there was nothing out of the ordinary during the flight, Brazy said.The pilot then waited and reviewed the weather, Brazy said, before he left from the 34th Street heliport on the east side of Manhattan to head to Linden, New Jersey.Soon after he took off, he radioed back to the heliport to say he was in trouble because of the weather and lack of visibility, according to law enforcement officials briefed on the probe.McCormack was flying at a very low speed, trying to maneuver his way to fly safely; at one point, he ascended higher than helicopters typically fly to try to get above the clouds, but he was unsuccessful, the officials said.Soon, he was traveling west into the no-fly zone, instead of south as he had planned, because he had become disoriented, the officials said.Then the helicopter crash landed, the officials said.The pilot was not certified to fly in poor weather where he could not visually navigate, according to FAA records. He was only certified to fly in conditions where he could visually navigate and not rely on the aircraft’s instruments. Investigators will decide if any regulations were broken, an FAA official told ABC News on Tuesday.

New York City poised to give noncitizens right to vote in local elections
‘Live in Front of a Studio Audience’ returns with lighthearted take on ‘Facts of Life’ and ‘Diff’rent Strokes’
Rebel Wilson says her Hollywood team thought losing weight would cost her “millions”
Halle Berry says she burned her Razzie Award: “I set that thing on fire”
Football player, 16, slain in Michigan school shooting to be mourned at funeral
Omicron live updates: Variant detected in Houston’s wastewater