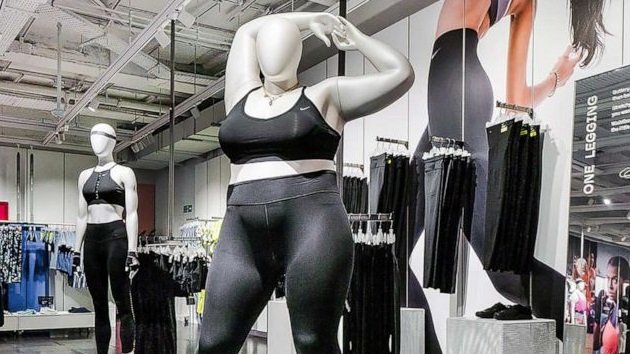 (NEW YORK) — When Nike rolled out its “plus size” mannequins for the launch of the new “Women by Nike” floor in NikeTown London last week, many cheered that the athletic company was promoting a more realistic body type.Others, however, decried the move as dangerous, saying that Nike was promoting an unhealthy lifestyle.A spokesperson for Nike, however, told “Good Morning America” that their mission is to “serve all athletes” regardless of size.”We launched the Nike Plus Size collection in 2017 – a collection crafted to ensure the perfect fit at every size. To showcase inclusivity and inspire the female consumer, we launched Nike Plus Size mannequins in select stores in North America in 2018 and as part of the recent launch of the new ‘Women by Nike’ floor in NikeTown London,” the spokeswoman said in a statement. “We continue to listen to the voice of the athlete and know that the female consumer wants to see a diverse and inclusive range of product to serve her sporting needs.”Last year, Racked reported that the average American woman is 5 ft., 3 in. tall, weights 168.5 lbs., and wears a size 16 or 18. The website also noted that in the United States, sizes 14 and up are considered “plus size,” though the term is often considered to be antiquated.Still, some people, including a writer who wrote an article for the Guardian newspaper entitled, “Obese Mannequins Are Selling Women A Dangerous Lie,” believe that the more typical mannequin is actually promoting “obesity.””The fat-acceptance movement, which says that any weight is healthy if it is yours, is no friend to women, even if it does seem to have found a friend in Nike. It may, instead, kill them, and that is rather worse than feeling sad,” the article read. “Fat-acceptance is an artifice of denial – they are fat because they do not accept themselves – and a typically modern solution to a problem, if you are a narcissist. It says: there is no problem. Or if there is, it’s yours, not mine. As soothing as that may be to hear, your organs and your skeleton will not agree.”The response to the article and those who shared the author’s belief was immediate. Actress Jameela Jamil slammed it as “fatphobic, pointless, bigoted abuse,” and Latoya Shauntay Snell, who writes the Running Fat Chef blog, called it “an abomination.”Added another user on Twitter: “Wow @Telegraph – nice job with the Tanya Gold click bait. I look like that @nike mannequin, and I’ve done a 10k, a half, & a marathon this year. And there’s another 10k & a half coming up. If you think obese women can’t run you’ve clearly been living under a rock.”