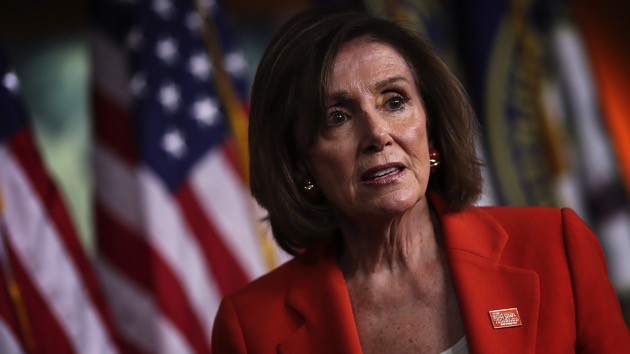 (WASHINGTON) — House Speaker Nancy Pelosi said on Tuesday that she won’t comment on whether she wants to see President Donald Trump “in prison” as she was reported to have said last week behind closed doors, but she did say that she is “done with” spending time talking about the president and his recent criticism of her during his overseas trip to France.“I’m done with him,” Pelosi said while being interviewed on stage at the 2019 Fiscal Policy event hosted by Peter G. Peterson Foundation.Trump attacked Pelosi in an interview with Fox News during his overseas trip in France last Thursday commemorating the 75th anniversary of D-Day calling her a “nasty, vindictive, horrible person.”“I think she’s a disgrace,” Trump said “I actually don’t think she’s a talented person, I’ve tried to be nice to her because I would have liked to have gotten some deals done. She’s incapable of doing deals, she’s a nasty, vindictive, horrible person, the Mueller report came out, it was a disaster for them.”Pelosi said on Tuesday she has decided not to fire back at the president and instead said she “doesn’t even want to talk about him.””My stock goes up every time he attacks me, so what can I say, but let’s not spend too much time on that because that’s his victory, the diverter-in-chief, the diverter-of-attention-in-chief.”Pelosi repeated her previously expressed view that impeachment of Trump is “not off the table,” but stopped short of saying whether she has an obligation to mount an impeachment inquiry.“I think the Mueller report very clearly spells out at least ten or 11 instances of obstruction of justice,” Pelosi said. “But I’m not here to have that discussion. That’s for the committees.”During a closed door meeting on Capitol Hill last Tuesday, Pelosi told key Democratic committee leaders “I want to see him in prison” rather see Trump be impeached, according to officials familiar with the conversation.While she did not confirm on Tuesday whether she did in fact express that sentiment to her caucus, she did not deny it either.“When we have conversations in our caucus they stay in our caucus,” Pelosi said. “Do people think there’s some impeachable offenses that the President committed? Yes. How serious are they? Are they criminal? Many people think they are.”