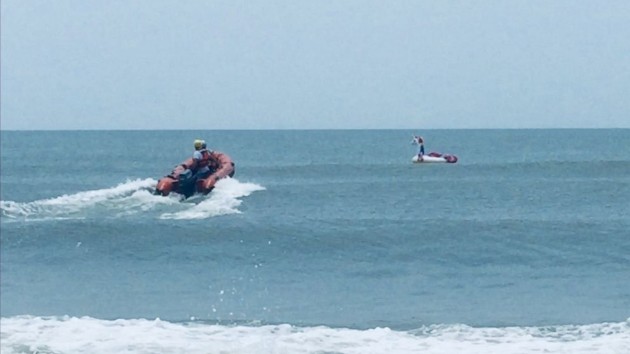 (NEW YORK) — What was supposed to be a fun family day at the beach turned into a scary circumstance when a young boy on an inflatable pool toy got swept out to sea in North Carolina.

“I was really scared and thinking like I might die and all that stuff,” Declan O’Connor, 8, told ABC News. His mother was audibly shaken on the phone with 911 dispatchers. “My son is floating out in the middle of the ocean on a floaty thing,” Jill O’Connor said. “He doesn’t have a life jacket on. He doesn’t, he doesn’t really know how to swim.”The large white and and pink unicorn float continued to drift into the distance and his father immediately jumped into action. “As soon as we saw him moving away we went after him,” Don O’Connor told ABC News. “We weren’t making ground, we were moving away faster, but his mom called 911 right away.”Before officials made it to the beach, the Oak Island Water Rescue team of volunteers set out to sea to bring the young boy back to shore. “It was a lot of tears, exhalation, being grateful and thankful for those rescuers,” Jill O’Connor said. The rescuers made their way onto dry land with Declan in their arms and delivered him right to his parents. “That was the best feeling I could ever imagine,” she said of the moment she embraced her son. The Oak Island Water Rescue team took to Facebook to use the incident as a teaching moment ahead of the summer and shared safety tips along with photos from the rescue.Pool floats have been spotted increasingly in similar incidents, which has prompted safety warnings associated with the risks of using them at the beach in open water.Declan said that after this incident he’s learned an important lesson and warned other young swimmers against his mistake. “Now I know never go out on a float ever again in the ocean,” he said.