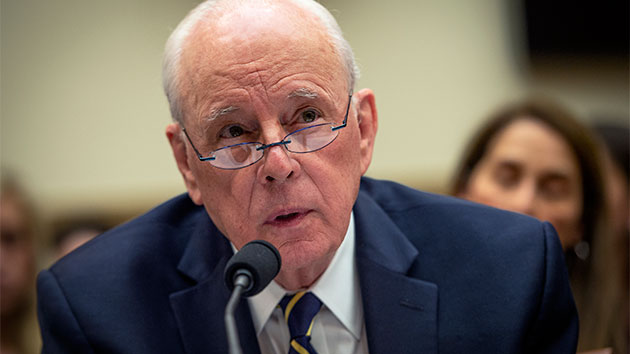 (WASHINGTON) —  Former White House counsel John Dean, who played a key role leading to the resignation of President Richard Nixon, testified on Monday before the House Judiciary Committee about possible obstruction of justice by President Donald Trump. It’s been 46 years since Dean sat before the Senate Watergate Committee in 1973 and captivated the country by revealing Nixon’s involvement — as well as his own — in the scandal. Nixon would resign the following year and Dean, who pleaded guilty to obstruction of justice, would serve four months in a minimum security facility.”In many ways, the Mueller report is to President Trump what the so-called Watergate road map, officially titled the grand jury report and recommendation concerning transmission of evidence to the House of Representatives, was to President Richard Nixon,” Dean said at Monday’s hearing. Democrats had called him to hear his take on special counsel Robert Mueller’s report.On Sunday, President Trump tweeted his thoughts on Dean’s upcoming testimony, calling him a “sleazebag.”

….No Obstruction. The Dems were devastated – after all this time and money spent ($40,000,000), the Mueller Report was a disaster for them. But they want a Redo, or Do Over. They are even bringing in @CNN sleazebag attorney John Dean. Sorry, no Do Overs – Go back to work!

Dean, 80, who has repeatedly criticized Trump as a cable television pundit, also took to Twitter to attack Trump ahead of his testimony.”Would someone get Trump a dog. He needs a friend so he won’t endlessly vent on Twitter,” Dean tweeted.

Would someone get Trump a dog. He needs a friend so he won’t endlessly vent on Twitter. He’s uninterested in government and policy. He doesn’t read. He doesn’t exercise. He has no real friends. A dog might save humankind. Admittedly, it a lot to ask of a dog. But help is needed.

46 years later, the testimony that precipitated a presidential resignationDean was only 32 years old when he was hired as Nixon’s White House counsel. He joined the administration two years before five men, hired by Nixon’s re-election campaign, broke into the Democratic National Committee headquarters at the Watergate complex, though he testified he didn’t know about it when it happened. Afterward, when he began to learn the details, he engaged in the cover-up.And he testified that Nixon did, too. He was one of the first officials in the administration to do so.Tapes of their conversations were eventually released, on which Dean is clearly heard telling the president, “We have a cancer within, close to, the presidency, that is growing.”After Dean was sentenced, he started on a path to educate and share the story of his Nixon years. Now 79, he’s written almost a dozen books on politics and history, including a day-by-day account of what Nixon knew in the Watergate scandal and when he knew it.On Trump’s radar

Dean hasn’t been a Republican since he testified in 1973, he said in his interview with Baldwin. He’s a registered Independent, and he said he’s voted for both Democrats and Republicans over the years. But he clearly disapproves of the Trump White House and often used the president’s own most common medium to share why.

Nixon, generally very competent, bungled and botched his handling of Watergate. Trump, a total incompetent, is bungling and botching his handling of Russiagate. Fate is never kind to bunglers and/or botchers! Unlike Nixon, however, Trump won’t leave willingly or graciously.

Dean has made it onto the president’s radar in the past. Trump, reacting to a story that his own White House counsel Don McGahn had talked to special counsel Robert Mueller, said it wasn’t true that McGahn was “a John Dean type ‘RAT."”

The failing @nytimes wrote a Fake piece today implying that because White House Councel Don McGahn was giving hours of testimony to the Special Councel, he must be a John Dean type “RAT.” But I allowed him and all others to testify – I didn’t have to. I have nothing to hide……

In an interview last year, Dean was asked to compare his experience to McGahn’s. Dean has long said that he decided to testify because he suspected the administration was going to use him as a scapegoat.”Today, they are much more aware of these things because of what happened during Watergate, when we learned about these laws the hard way,” Dean said.He also spoke of connections to Michael Cohen, the president’s personal attorney who pleaded guilty to paying two women for their silence ahead of the 2016 election, among other charges.Cohen’s lawyer, Lanny Davis, is an “old friend” of his, Dean said.”Lanny knows Watergate pretty well and saw certain parallels between his client’s situation and mine. I was happy to share with Lanny information to refresh his recollection about those times,” Dean said in late August, after he was featured in the president’s tweet.Dean at the Kavanaugh hearing’sHe testified at Supreme Court nominee Brett Kavanaugh’s confirmation hearing on a subject he’s spent the past four decades unpacking: whether a president is above the law.The answer, according to famed Watergate whistleblower John Dean, is an emphatic no.Dean was called to testify by Democrats, who asked if he thinks a sitting president can be subpoenaed or indicted.Dean, an outspoken Trump critic, warned the committee of the risks of a “weak check” on presidential powers that a right-leaning court could bring, according to his testimony.”There is much to fear from an unchecked president who is inclined to abuse his powers. That is a fact I can attest to from personal experience,” Dean said. “If Judge Kavanaugh is confirmed, I submit we will have the most pro-presidential powers Supreme Court in the modern era.”Dean brought up the different arguments and statements Kavanaugh has made over the years on presidential privilege, from the nominee’s time working with Independent Counsel Kenneth Starr on the investigation of former President Bill Clinton to his time working as an associate White House counsel under President George W. Bush, which Dean called “inconsistent.””In short, under Judge Kavanaugh’s view, even if a president shot someone in cold-blood on Fifth Avenue, that president could not be prosecuted while in office. And based on Judge Kavanaugh’s thinking at the time, he would give a president plenty of time to destroy the evidence,” Dean wrote.He also gave his opinion on the documents detailing Kavanaugh’s time in the Bush White House that were withheld from the committee, a storyline that dominated the hearings since day one.Dean wrote of Justice William Rehnquist and Justice Clarence Thomas, “both of whom went to the Court with clouds questioning their honesty and integrity hanging over them.””If these hearings do nothing else they should establish beyond a reasonable doubt, if possible, that another cloud regarding truthfulness of another justice does not cast doubt on the Court. This is the reason Judge Kavanaugh should want every document he has ever touched reviewed by the committee, unless he has some he wants hidden,” Dean ended his statement.Copyright © 2019, ABC Radio. All rights reserved.