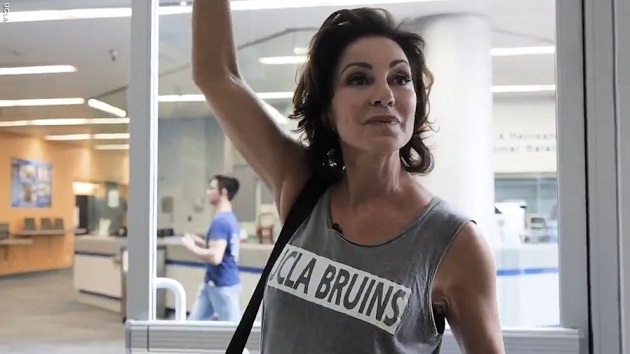 (LOS ANGELES) — Behind those viral floor routines, perfect 10 scores and NCAA National Championship titles lies the hard work and dedication of UCLA’s student athletes.But now, the woman who has been at the helm of the university’s celebrated gymnastics team for the past 37 years is saying goodbye.Valerie Condos Field, or “Miss Val,” as she hopes she is affectionately known, will retired from her position as head coach of UCLA’s gymnastics team at the end of the month.”While I love, love, love my job at UCLA, there’s not been one day that I haven’t thoroughly enjoyed it, I need more time in my day to work on my bucket list,” Field told ABC News.Field, who announced her retirement to the team in September, said she started thinking about retiring after a breast cancer diagnosis four years ago.”When I got breast cancer … I chose to use my time in chemotherapy as my chemo spa. … A spa is someplace you go to get better and get fortified, so I used it as my time to work on my bucket list,” she said.Fields started her UCLA career as a 22-year-old dance coach for the gymnastics team, but was asked to take over as head coach eight years later.”I said…‘I don’t know the first thing about gymnastics.’ And she said, ‘I’ve observed how you’ve worked with the students athletes. … I love how you are tough with them but you’re compassionate. … I trust you’ll figure the rest out,"” Field said.

Reputation and recognitionThe UCLA gymnastics team attracts athletes from all over the world. Field said it’s because of the university’s recognizable name.But since becoming head coach, Field recruited former elite gymnasts and Olympic medalists to the team, such as current team members Madison Kocian of the 2016 U.S. Olympic team and Kyla Ross of the 2012 U.S. Olympic Team.During her time at UCLA, Field’s team has won seven NCAA National Championships titles.”For all of those championships, even the ones that we didn’t win but the one that I can leave and remember back on with no regret, in all of those teams I remember about a month before the championships came feeling like my hands were off the steering wheel and the athletes were taking ownership of their team,” Fields said. “And I’ve always told them that when I feel that, that’s when I know the magic is going to happen.”That magic is also what has made moments like Katelyn Ohashi’s floor routine go viral.”It’s interesting that everybody was so excited this year about Katelyn’s floor routine going viral and they say it’s because she scored a perfect 10. That’s not the reason, because the year before, her routine went viral, and scored a 9.95. So it’s not about the illusion of perfection as much as it is seeing this young woman do incredibly difficult gymnastics skills that a normal person can’t even fathom,” Field said.

Out in the lightDespite viral-inspired interest in the sport, the past year has been difficult for gymnastics in the U.S. The sport was rocked by the scandal of former USA Gymnastics team doctor Larry Nassar, who was convicted in 2018 of 10 counts of first-degree criminal sexual conduct after admitting to using his position as a doctor to sexually abuse young patients.”I think it was more apparent this year because we were still in the lull of the darkness of what happened in United States gymnastics the last year,” Field said, noting her belief that Ohashi’s routines have helped put gymnastics back into a positive light.”And I think it was just the perfect timing for someone like Katelyn who had been an elite athlete, who had been broken in the system, to be able to come back and show just how great the sport really is,” she added.”I don’t think there’s a culture of fear inherent in gymnastics at all. I think that there has been a culture of fear cultivated in the USA Gymnastics team,” Field said, discussing the reign of Romanian-American gymnastics coach Martha Karolyi, who retired as the USA Gymnastics’ women’s national team coordinator after 15 years following the 2016 Olympic Games in Rio.”You know, quite honestly, I don’t blame her because that’s how she was coached. We just brought this Eastern Europe style of coaching through fear … and we embraced it and we cultivated it because it worked, because we won. We won medals and medals mean money,” Field continued.”I think it’s really important for people to understand it’s not the sport and it’s not even the majority of coaches out there,” she said. “It’s a very small handful that are representing the ugly side of this sport, but it’s in all sport sadly and we need to do a much better job.””Guess what,” Field said. “You can produce champions without stripping the joy out of the process.”Speaking before Field’s final competition as head coach of UCLA gymnastics at the university’s Pauley Pavilion, Ohashi spoke to Pac-12 Networks saying, “[Field has] been so powerful in my life and just allowing me to trust in someone that’s a coach to me, which I never had before and so I’ve learned so much from her.””I honestly believe that I develop superheroes and I develop champions in life, though the sport of gymnastics,” Field said.

That bucket listField said she felt a weight lift off her shoulders walking out of her last national championship competition. And although she will miss UCLA, she says her plate is “flowing over.”Field is already an accomplished author of the book Life is Short, Don’t Wait to Dance, which she started writing while receiving chemotherapy treatments. She said she’s excited to continue doing speaking engagements, working on producing an urban Nutcracker film, continuing to choreograph shows at Sea Word San Diego and develop a movie on the life of a UCLA alumnus.Copyright © 2019, ABC Radio. All rights reserved.

Anthony Mackie and Damson Idris explain why previous roles didn’t influence their ‘Outside the Wire’ characters
Real-life ‘League of Their Own’ player raises money for 94th birthday to build women’s baseball center
Taco Bell introduces new plant-based menu items, plus a special message about the return of potatoes
POLL: With partial blame for the Capitol attack, majority favors barring Trump from office
Blizzard warning issued for Midwest as storm moves into Northeast
NY passenger bus hangs off overpass in the Bronx after crash, at least 8 left injured