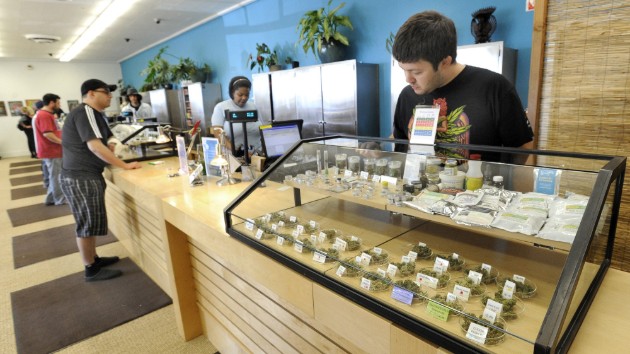 (NEW YORK) — When Steve DeAngelo co-founded a medical marijuana business in Northern California as a non-profit more than a decade ago, he never dreamed the plant treasured by pot-smoking hippies of the 1960s and demonized by anti-drug crusaders would one day be embraced by the white-collar world of finance.On Monday, the company DeAngelo helped launched, Harborside Health, made a public stock offering on the Canadian Securities Exchange, joining a “green rush” of U.S. cannabis businesses headed to the Great White North to cultivate capital. “For my whole life, I believed that one day cannabis would be legal, not just in the United States but around the world…I didn’t envision exactly the shape that all of this would take. I didn’t really envision that one day I would be the chairman emeritus of a publicly traded cannabis company,” the 60-year-old DeAngelo, known as the “father of the cannabis industry,” told ABC News.When the Canadian stock market opened on Monday, Harborside, which is based in Oakland, California, and valued at $350 million to $400 million, became the 66th U.S. cannabis company to be traded on the exchange. The company is trading under the ticker symbol HBOR. “It’s an epic milestone in the development of the cannabis industry from its activist beginnings decades ago to becoming a part of mainstream commerce today,” DeAngelo said.

Harborside’s public offering was enabled, in part, by its merger earlier this year with a small Canadian cannabis company, Lineage Grow Co., in a complex maneuver known as a “reverse takeover.” Under the deal, Lineage Grow Co., which has recreational cannabis dispensaries in California, technically bought out Harborside. “But when we merged with them, our shareholders held many more shares than they did, so hence the reverse takeover,” DeAngelo said. “That was mainly to enable us to meet the regulatory requirements of the Canadian stock exchange.”

While there are some biotechnology companies and ancillary cannabis outfits that trade on U.S. exchanges, businesses that directly cultivate and sell recreational cannabis have been barred from being listed on any of the U.S. financial exchanges. That’s because marijuana remains classified by the federal government as an illegal schedule 1 drug, the same as heroin and LSD.Because such cannabis companies can’t accept credit cards due to banking regulations, the legal weed industry has mostly remained a cash-only business.”As an American entrepreneur, it’s a tragic thing because what we’re missing is the giveaway of an industry that was born, that was developed in the United States, to Canada,” DeAngelo said. Billions raised in CanadaRichard Carleton, a spokesman for the Canadian Securities Exchange, said there are a total of about 160 cannabis companies listed on the exchange, including businesses from South America, Asia and Israel.Carleton told ABC News that the U.S. cannabis companies alone raised about $2.2 billion U.S. dollars on the Canadian exchange in 2018, and have already raised nearly $700 million this year.U.S. cannabis companies on the Canadian exchange, according to Carleton, have a collective value of about $26.3 billion.”The interesting thing is the money is not just coming from Canada,” Carleton said. “When we did a bit of a deep dive, we saw investors from more than 100 jurisdictions globally invest in the sector last year. It’s fair to say a significant amount of capital is coming from investors in the United States.”Canadian lawmakers approved landmark legislation in June 2018 to fully legalize marijuana in the country, but cannabis companies have been trading on the Canadian Securities Exchange since 2014.Carleton said the first U.S. cannabis company to list on the Canadian exchange was Golden Leaf Holdings, headquartered in Beaverton, Oregon, which made a public offering in 2016, about a year after recreational marijuana was legalized in Oregon.Since then, a steady stream of U.S. companies has followed in Golden Leaf’s footsteps and headed north of the border to grow capital on the exchange. With more states legalizing weed, the rush of companies goin to Canada to raise money is expected to continue.The Illinois state legislature approved a bill on May 31 to make the state the 11th in the nation, along with Washington D.C., to legalize adult recreational use of marijuana. The bill now awaits the signature of Gov. J.B. Pritzker, who says he intends to sign it.A total of 33 states allow legal medical marijuana, which requires that users get a doctor’s approval before a medical marijuana card can be issued.

Epicenter of weed industryCalifornia became the first state in the nation to legalize medical marijuana after voters there passed the Compassionate Use Act in 1996.Harborside Health, founded in 2006, was among the first six cannabis dispensaries in California granted a license to sell medical pot, according to the company.Voters in California passed Proposition 64 in 2016, making adult recreational cannabis legal. On Jan. 1, 2018, DeAngelo made the first legal sale of adult recreational cannabis to customer Henry Wykowski at Harborside’s dispensary in Oakland.Harborside now boasts two major legal weed dispensaries in the Bay Area and a 47-acre marijuana growing farm in Monterey County, California. Harborside has 250,000 registered customers and recorded $45 million in sales last year, according to the company.Up until now, Harborside, one of the largest cannabis companies in California, has chosen to exclusively do business in the Golden State, but that might soon change with more financial backing expected to pour in from Canada and a loosening up of regulations in the U.S.”Our strategy is to focus on California because we believe that California, specifically Northern California, is the birthplace and the epicenter of what will grow to be a global cannabis industry,” DeAngelo said.”So we want to test our brands, prove our products here in California and we look ahead to the day when there will be interstate commerce in cannabis in the United States,” he added. “And then we intend to push those products out to all 50 states.”But not every cannabis entrepreneur is looking to Canada for financing.”Once you go public, you are now subject to the interests and concerns of very short-term investors that are looking for quarter-to-quarter growth and quarter-to-quarter earnings,” Jonathan Loitermann, chairman and chief executive officer of Green Star, an Oregon cannabis producer, told ABC News. “In a very volatile environment, it could cause management of the company to over-adapt to the particular circumstances at the time, even though we know that two massive revolutions are coming.”

Game changersOne of those revolutions could transform the banking industry’s hands-off attitude to weed.A proposed bipartisan bill called the Secure and Fair Enforcement Act, or SAFE Act, would enable banks and credit unions to do business with cannabis-related companies in states where marijuana is legal. The House Financial Services Committee approved the bill in March and it’s expected to be waived through the House Judiciary Committee and eventually go to a full vote of Congress.“If this is something that Congress wants to look at on a bipartisan basis, I’d encourage you to do this. This is something where there is a conflict between federal and state law that we and the regulators have no way of dealing with,” U.S. Treasury Secretary Steven Mnuchin said during a House appropriations subcommittee hearing in April.Loitermann, a lawyer and a former member of the Oregon Liquor Control Commission’s Cannabis Advisory Board, called the SAFE Act a potential “massive game changer” for the cannabis industry.”We could see full access to the banking industry, which means mortgages and credit cards, and checking accounts and all these other things,” said Loitermann, who also served as chairman of the Illinois Bar Association’s Health Sections Council.Meanwhile, the 2018 Farm Bill, which was signed by President Donald Trump, legalized the cultivation and interstate sales of hemp. The legislation defines hemp as the part of the cannabis plant that contains less than 0.3 percent tetrahydrocannabinol, or THC, the active ingredient of marijuana that gets people high.”If you’ve got a long-term view, you don’t want to overcommit,” Loitermann said. “You want to be prepared to adapt to the changes those revolutions will bring.” Copyright © 2019, ABC Radio. All rights reserved.