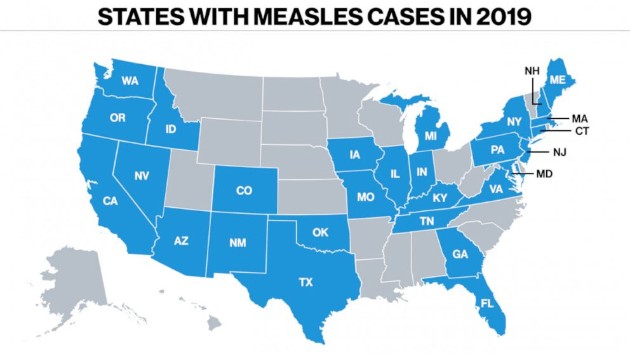 (NEW YORK) — The ongoing measles outbreak reached a new record, surpassing 1,000 confirmed cases in the U.S. so far this year. The Centers for Disease Control and Prevention reported Monday that there have been 1,022 cases in 28 states through June 6. That marks an increase of 41 cases since the previous week. The last update noted that in the first five months of the year, from Jan. 1 through May 31, there were 981 cases confirmed.The disease is now present in more than half of all states, with Idaho, New Mexico, Virginia and Maine confirming their first cases in the past several weeks.The new total, while hitting the symbolic threshold of 1,000 cases, has already created records in that there have been more cases so far in 2019 than there had been in any other year since measles was eradicated in the United States in 2000.In fact, there have been more cases so far this year than there have been in the past four years combined, according to CDC data.

The majority of cases have been limited to a small number of populated areas within the 28 states where they’ve been reported. In New York state, New York City has had 566 confirmed cases from September through June 3, while Rockland County has had 259 confirmed cases from an unspecified 2018 date to June 6. The CDC has not reported an outbreak in any other part of the state. There have been 81 cases in Washington state — and 71 of those were in Clark County alone, though all of those were reported before May. In May, there were nine new cases throughout the state, their department of health reported. California’s health department reported 51 confirmed cases as of June 3, with the highest total in one county: 10 in Los Angeles.