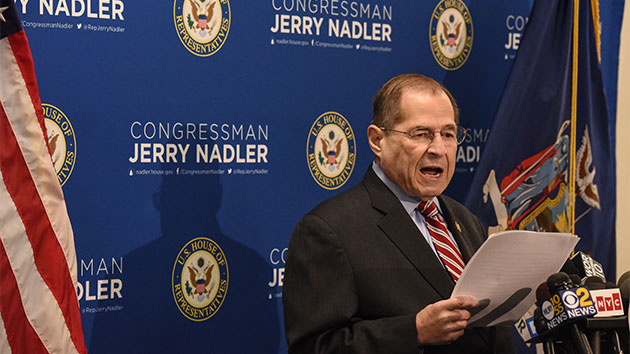 (WASHINGTON) — The Democratic chairman of the House Judiciary Committee, Rep. Jerry Nadler of New York, said on Monday he has reached a deal with the Department of Justice on turning over evidence from special counsel Robert Mueller related to the investigation into what could be obstruction of justice by President Donald Trump.”I am pleased to announce that the Department of Justice has agreed to begin complying with our committee’s subpoena by opening Robert Mueller’s most important files to us, providing us with key evidence that the Special Counsel used to assess whether the President and others obstructed justice or were engaged in other misconduct,” Nadler said in a statement.”The Department will share the first of these documents with us later today. All members of the Judiciary Committee—Democrats and Republicans alike—will be able to view them. These documents will allow us to perform our constitutional duties and decide how to respond to the allegations laid out against the President by the Special Counsel. Given our conversations with the Department, I will hold the criminal contempt process in abeyance for now,” Nadler said.The top Republican on the Judiciary Committee, Rep. Doug Collins of Georgia, said the Justice Department agreement with Nadler “debunks claims that the White House is stonewalling Congress.”“The Justice Department has yet again offered accommodations to House Democrats, and I am glad Chairman Nadler — for the first time in months — has finally met them at the negotiating table. Today’s good faith provision from the administration further debunks claims that the White House is stonewalling Congress …””In light of today’s agreement from the Justice Department, it’s logical to ask: Is the chairman prepared to rescind his baseless recommendation to hold the attorney general in contempt, or do House Democrats still plan to green light lawsuits against the attorney general and former White House counsel tomorrow?”House Democratic leaders had scheduled a floor vote for Tuesday on a resolution authorizing Nadler’s committee to enforce its subpoenas against Barr and former White House counsel Don McGahn in federal court.”Some enforcement action may be necessary to obtain documents and testimony outside the scope of today’s agreement with the Department of Justice, including testimony from former White House Counsel Don McGahn,” Nadler said. The Trump White House has directed McGahn not to cooperate with the committee.”We are pleased the Committee has agreed to set aside its contempt resolution and is returning to the traditional accommodation process. The Department of Justice remains committed to appropriately accommodating Congress’s legitimate interests related to the Special Counsel’s Investigation and will continue to do so provided the previously voted-upon resolution does not advance,” Justice Department spokesperson Kerri Kupec said in a statement. Copyright © 2019, ABC Radio. All rights reserved.