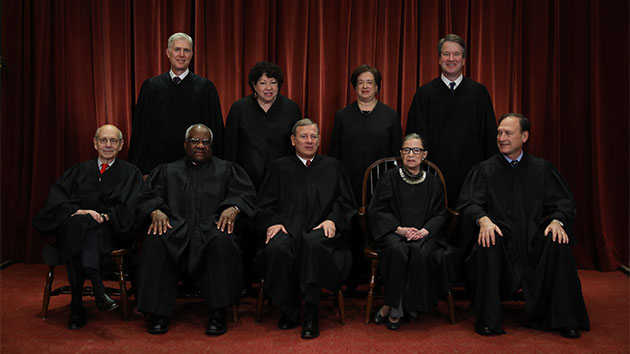 (WASHINGTON) — Supreme Court Justice Ruth Bader Ginsburg, who faced two serious health scares in the past year at age 86, is looking ahead to a 26th year on the bench and hinting at “sharp divisions” ahead for the court. Ginsburg previewed the court’s next term in a speech Friday at the Second Circuit Judicial Conference. She said two cases from the circuit – a gun rights case and an LGBT employment discrimination case, both out of New York – “will be frontrunners.”The remarks signaled Ginsburg’s characteristic determination to stay on the bench, defying speculation that she may be nearing retirement by choice or infirmity.The justice was absent from public proceedings for several weeks earlier this year after undergoing cancer surgery — the first time she has missed oral arguments in her more than two-decade career on the bench. Several weeks prior to surgery, she fractured three ribs in a fall at her office. Last summer, Ginsburg suggested she planned to remain on the job until after her 90th birthday.Reflecting on the current term, the first for the court’s new conservative majority, Ginsburg said the nine justices were more united than divided when issuing opinions. But on several big pending cases, she said, there are likely to be “sharp divisions” ahead.”Of the 43 argued cases resolved so far, only 11, or just over 25 percent, were decided by a vote of 5 to 4 or 5 to 3,” Ginsburg said. “Given the number of most watched cases still unannounced, I cannot predict that the relatively low sharp divisions ratio will hold.”The court on Monday released three more opinions as it looks to wrap up business for the term by the end of June, but it held the most eagerly-awaited decisions for release in the next two weeks. The court is set to rule on whether there should be limits to partisan gerrymandering and whether the 2020 Census can include a question on citizenship, among other issues.Ginsburg also gave credit to the newest member of the court, Justice Brett Kavanaugh, for boosting the influence of women inside the court.

“Justice Kavanaugh made history by bringing on board an all-female law clerk crew. Thanks to his selections, the court has this term, for the first time ever, more women than men serving as law clerks,” Ginsburg said.

“I’d be up for that!” Liam Neeson wants to re-join the ‘Star Wars’ universe with Disney+’s ‘Obi-Wan Kenobi’ show
‘WandaVision’ star Paul Bettany on his father’s struggle to come out of the closet
Five steps you can take now to boost your fitness and avoid severe illness from COVID-19
Giuliani says he won’t represent Trump at president’s impeachment trial
How to build an emergency fund, how much to save for it and how to avoid spending it
Why Joe Biden’s inauguration will be like no other — and how to watch